More than new venues for learning

Greg Jewell on how a mobile library supported by UNICEF is enriching the lives of children in a remote village in Ratanakiri province.

Chen Rachana is ten years old and studies in the third grade. She lives in Kak village in the Borkeo district of Ratanakiri. The province is located close to the Cambodian and Vietnamese/Laos borders, a nine-hour drive northeast of Phnom Penh. Ratanakiri is best known for its beautiful waterfalls, a lake in the middle of a mountain formed by an ancient volcano, and as the destination from which trekkers leave for their jungle excursions.

Rachana’s village is composed of elevated wooden houses, built on stilts. Rachana’s father runs a small convenience store out of their home, and her mother is currently in the hospital recovering from a stomach illness. Reaching a hospital is a challenge, as Rachana’s village is quite remote. Given their community’s isolation, many residents don’t seek treatment when they are sick because there are no healthcare services nearby and they often don’t have the proper documentation which allows them to access free healthcare.

The remoteness of their village also affects their ability to access other social services that are more readily available to residents of larger cities such as Phnom Penh.

Rachana routinely helps her family with chores around the house and with her father’s business. But today is a special day. Though the ground is still muddy from the previous night’s rain, the village is abuzz with activity as SIPAR, a non-governmental organisation that promotes education, health, and nutrition, has just arrived.

SIPAR, which is supported by UNICEF, comes to the village once a week to host different educational activities geared toward the needs of its residents.

Today, they divided the villagers into three groups based on their age. Those aged 3-7 gather at the community pavilion to watch a puppet show, listen to Kamishibai storytelling, and take part in other artistic activities such as puzzles and colouring.

Those aged 8-17 gather in a family’s home watching episodes from a TV series produced by UNICEF highlighting the importance of proper nutrition and water, sanitation, and hygiene (WASH) practices, before joining the ‘free reading’ session and educational games taking place at the pavilion. And parents assemble in the shade of a stilted home where they take part in a course on health and nutrition, learning about the importance of the different food groups, as well as proper WASH techniques.

A significant problem in Rachana’s village, as in many remote communities, is that a large number of its residents lack knowledge on appropriate sanitation and hygiene practices, including the importance of using clean drinking water, consistently to avoid preventable illnesses. However, many villagers, including Rachana’s parents, are illiterate, which presents a further challenge in helping them learn about the importance of nutrition and WASH issues.

According to Sin Sothea, the library programme coordinator for SIPAR, the primary objective of their work is to promote education by gearing their activities towards the needs of the residents they serve.

“The small kids don’t understand about nutrition,” he said, “so we teach them simple things, such as the importance of washing their hands. They also learn how to open a book, hold a pen, or write their name. For the older children, we deliver education through an entertaining video on how to keep healthy, for instance. We try to make the sessions fun and engaging so that the residents will be excited to learn and welcome us back.”

The library itself works just as one would expect, however: each week the mobile library comes to the village and residents can borrow a book, and the next week when it returns, they can exchange the book and receive a new one.

Rachana has a tremendous passion for reading. Once the free reading period began, her eyes lit up, and she rushed to the front of the line to get the first choice of books from the librarian. During the reading session, many of the younger children crowded around her, and she patiently helped them to decipher the words of the stories they were reading.

Rachana says that she enjoys teaching others to read because “reading is my favourite thing to do”.

In fact, Rachana will read just about any book she can get her hands on, though she especially enjoys books with snakes or fairytales involving a princess. While she is only ten years old, Rachana has been reading for some time, and that is why she is so thankful for the weekly visits from SIPAR. Before the library came to her village, the only books she could read were textbooks from her school since her family doesn’t own any book.

“The mobile library began my love of reading,” she explained, smiling, “because textbooks aren’t as fun to read as picture books.” Though Rachana’s parents are illiterate, they love to hear her read to them from the books she receives from SIPAR. 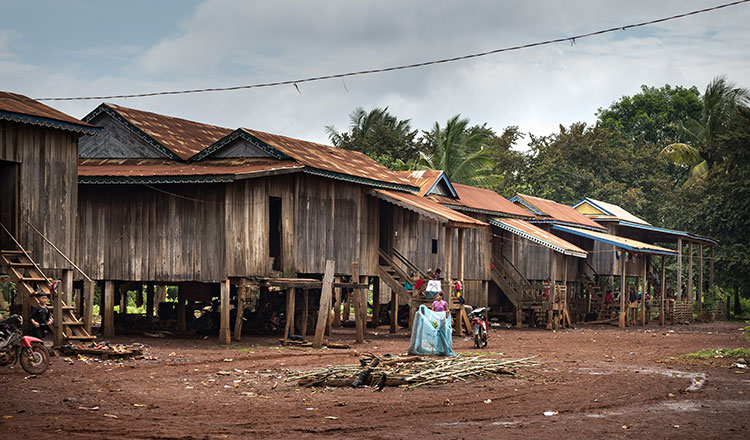 Rachana wants to become a teacher when she grows up so that she can teach others in her village the joy of learning. She takes her studies very seriously and attends school daily. Her favourite subject is mathematics.

The work that SIPAR does in 80 villages in Ratanakiri, Kratie, and Phnom Penh is vital for the personal growth of children like Rachana. UNICEF is supporting these mobile libraries with funding from Sida, Primark through the Irish National Committee for UNICEF, as well as the Australian, Korean, and Canadian Committees for UNICEF.

This exciting project not only opens new avenues for learning – that otherwise children from poor families and remote communities wouldn’t have – but it also helps to bridge the knowledge gap surrounding WASH and nutritional issues by bringing information to people where they are, both physically and pedagogically. SIPAR’s innovative work has been foundational in positively shaping the views of those in Rachana’s village towards health, nutrition, and education. And in Rachana’s view, “they shouldn’t change a thing.” UNICEF Cambodia