Home - The King is not a mediator: CPP

The King is not a mediator: CPP

A ruling CPP spokesman has slammed a political analyst for calling on the King to mediate discussions between Prime Minister Hun Sen and former opposition leader Sam Rainsy.

“The meaning of the constitution does not stipulate that the King has a role in national reconciliation and national unity,” Mr Eysan said. He also said it states that the King shall assume the role of arbitrator to ensure the faithful execution of public powers.

“What the analyst said is just a trick because he wants to confuse the public and it is also a trick to lure the King into violating the constitution and laws because there is no political crisis in Cambodia at all,” Mr Eysan said.

“These crises are here and are being felt regardless of efforts to suppress them. And our King has a constitutional role as an arbiter to ensure the country’s constitutional order, and he should do so whenever it is affected by these crises,” Mr Mong Hay said.

Mr Eysan said that Mr Rainsy, who lives in exile, has been convicted of crimes because he broke the law, noting that he should have served his sentence rather than fleeing the Kingdom.

“The way to solve the Sam Rainsy issue is to place him in prison so that it is fair to other prisoners and there is no need to push the King to violate the law,” he said. 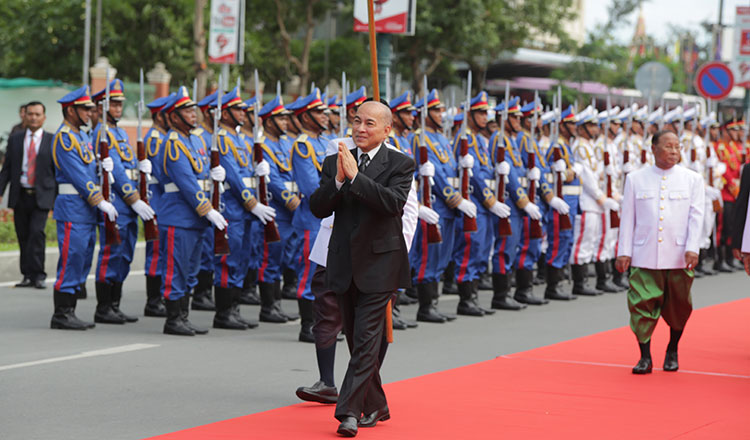 The Supreme Court dissolved the opposition CNRP in November last year and banned its 118 senior party members from politics for five years after its former leader Kem Sokha was charged with treason.

Former opposition lawmaker Ou Chanrath said that the King has a role to mediate both national reconciliation and political tension.

“I think the public, Khmer leaders as well as civil society groups have to try asking the King to intervene so that he has the role to solve all the issues,” Mr Chanrath said.

The government on Monday marked the 14th anniversary of the King’s coronation by saying he has significantly contributed to national prestige and strengthened rule of law during his reign.