Relations with China to continue growing

A high-ranking Chinese official has vowed to boost ties with Cambodia to a new high, noting that the Kingdom has steady economic development during a meeting with Prime Minister Hun Sen yesterday.

During a meeting with Mr Hun Sen at the Peace Palace yesterday, Li Hongzhong, a member of Political Bureau of Communist Party of China Central Committee and Secretary of the CPC Tianjin Municipal Committee, said Cambodia is at harmony and its people are enjoying good living conditions as the economy continues to grow.

“Mr Li believes that as Cambodia is now at peace with stability, that contributed to the fact that Prime Minister Hun Sen and the Cambodian People’s Party won a landslide victory in the recent election,” Mr Sophalleth said.

The CPP swept all 125 seats in the National Assembly during the national election in July.

Mr Li regards Mr Hun Sen as the best friend of China and respects the CPP’s national policy, Mr Sophalleth said, noting that his visit was to exchange views between the two countries’ top leaders and boost cooperation as well as mark the 60th anniversary of diplomatic ties, especially with Tianjin.

Mr Hun Sen agreed with what Mr Li said, noting that the relationship between the two countries has become stronger and that strategic cooperation has proved fruitful. 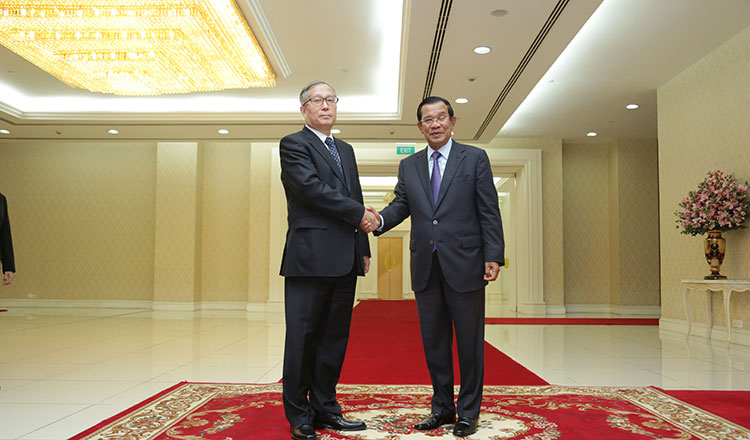 The bridge, which cost about $20 billion, spans 55 kilometres and connects Hong Kong to Macau and the mainland Chinese city of Zhuhai.

According to government data, from January to June, Chinese investment was worth $5 billion, making China the biggest investor in the Kingdom.

Chinese investors are involved in almost every economic sector, from energy to infrastructure, and from tourism to real estate and finance. China is also the number one nation when it comes to foreign tourist arrivals.

An estimated 1.5 million Chinese tourists have visited Cambodia this year and in 2017 the figure was 1.2 million, according to Mr Hun Sen.