Prime Minister Hun Sen yesterday marked the 14th anniversary of King Norodom Sihamoni’s coronation by saying the King has significantly contributed to national prestige and strengthened rule of law during his reign.

On behalf of the government, Mr Hun Sen on Facebook congratulated King Sihamoni and wished him good health.

“His Majesty the King has [contributed] the most to promoting national prestige, expanding rule of law and promoting economic development,” he said.

A post on the King’s Facebook page yesterday said that Princess Norodom Arunrasmey, personal adviser to the King, presided over a coronation anniversary event at the Royal Palace. 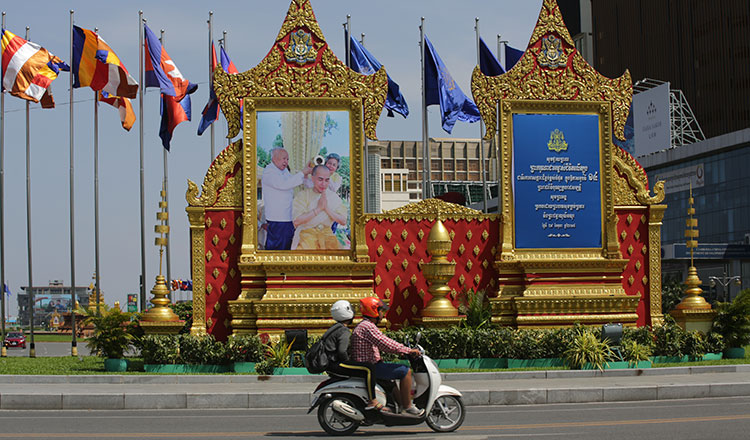 It noted that during his 14-year reign, King Sihamoni has been busy meeting citizens across the Kingdom, especially those who were hit by disasters.

It said that portraits of King Sihamoni were displayed in front of government buildings and institutions, while congratulatory messages were written on canvases throughout Phnom Penh.

Portraits of the King’s philanthropic activities were also seen in gardens near the Independence Monument.

However, this year’s coronation was not as apparent as last year’s. Some in Phnom Penh noted during the day that a portrait of the King was not hung in front of the Royal Palace.

Chakrya, a 23-year-old woman who was sitting in front of the palace, yesterday said the palace was quiet.

“I think they should display the King’s portrait in front of the palace – maybe the anniversary is being celebrated elsewhere,” Ms Chakrya said, adding that Cambodia is now in a better place than decades ago. “Now our country has peace, but if we look into other things, such as labour, land disputes and illegal immigration, there are still problems.”

However, he said that Cambodians love the King and will always respect his authority. “Our people are happy and we are really respectful toward our King,” Mr Sina said.

“Under the King, the country has walked on the path of peace and stability,” he said. “National prestige has promoted Cambodia in the universe, as the Khmer people continue to improve their livelihoods.”

Relations with China to continue growing