Eileen McCormick, on a personal journey to Ratanakiri, reconnects with an indigenous Tampuan healer she met two years ago and shares their common connection with Kuan Yin, the Goddess of Mercy.

My work as a journalist has provided me the opportunity to travel to remote parts of Cambodia and meet some truly inspiring people. This was the case two years ago when I was covering a story on gold mining in the northeastern province of Ratanakiri.

In order to cover the story, both Sonny Krishnan (the editor of Good Times2) and myself had to hire two local tour guides to help us navigate and help with translation. Taking full advantage of travelling with locals for the day we also decided to add some other stops on our trip. We first wanted to do a follow up on a supposed village in the area that had been pretty much decimated because of a black magic curse. While I can recall the village was indeed sparse, I cannot confirm or deny the existence of black magic there.Keeping in tempo with our curiosity for spiritual practices we asked our tour guides if they knew any reputable Kru Khmers or healers. In Cambodia, supernatural beings are widely believed to be responsible for a range of health and spiritual problems, from mental illness to chronic pain. The Kru Khmer fills a critical need in a country short on doctors and trained pharmacists.

Our guides honestly were not sure but made every effort to ask locals for suggestions and this is how my life became connected to a Tampuan indigenous man by the name of Kweh Tien in Ke Chong commune in Ratanakiri’s Bakeo district.

Let me take a step back in order to explain exactly how Kweh Tien and I became connected.For me, I was working with plant medicine and started to feel eyes appear on my palms. I felt so overwhelmed that I had to go to my Osho tarot card deck and pick a card. What appeared was the Green Tara, a version of Kuan Yin. The overall message I received was that I was to have an initiation of self-passion, far beyond self-love and share that with others.

In case you are wondering who is Kuan Yin, she is an East Asian deity of mercy and a bodhisattva associated with compassion – as venerated by Mahayana Buddhists. The name Kuan Yin means “Observing the Sounds (or Cries) of the World”.

In English this is translated to mean the Goddess of Mercy. This is because her sacred duty is to relieve suffering and encourage enlightenment among humans.

She was rejected at birth and abused by a father who had wanted a son. He sought to marry Her off, but She refused, only wanting to become a nun. Her vengeful father even hired a man to kill Her, but She forgave him. In the end, her unconditional love and mercy saved his life and it is said that she plucked out her own eyes giving them to him.

This is why she is now often depicted with thousand arms and eyes in the palms of each of her hands. At the time of my experience I did not know this about her. But since having the chance to read up on her and work with her I know this compassionate goddess has many manifestations. My chance encounter in Ratanriki is just one example of how she has chosen to work with me.

Our journey began when we reached Saleav village. We were told he wasn’t there and had left a day earlier to do healing work in neighbouring villages. His family, instead of shooing us away, encouraged us to look for him. We searched in two villages and finally found him in Tien village in Ke Chong commune, deep in a rubber plantation.

“I had been waiting for both of you to come and see me,” said Kweh Tien, as we climbed up the wooden stairs into the hut, where he was praying over a sick man. “I had a dream that there will be two people visiting me from Phnom Penh.”

I was perplexed but sat down and watched him hold an audience with what seemed like 40 people. Once he was done with his work, we had the chance to talk.

“I have met you before on a trek to Chiso Mountain. It was several years ago,” said the Tampuan indigenous healer. I was dumbfounded.

Yes, indeed, I made a journey to Takeo province with several friends at the time to trek up Chiso Mountain to pay my respects at the Phnom Chiso temple which was built in the early 11th century by King Suryavarman I, who practiced Brahmanism.

So how could a Tampuan man, who had never been out of Ratanakiri, have met me on Chiso Mountain in Takeo province?

“My spirit was there,” he told me.

I know in Cambodian culture traditional healers often have Neak Ta, land spirits or ancestors etc. that they are connected to when they perform rituals and healing. I decided to ask him who was it that he was working with? At which point he told me “Kon-sa-im” the Khmer name for Kuan Yin.

Kweh Tien related how Kuan Yin came to him as a boy.

“I am an orphan and never knew my mother’s love. One afternoon, in 1984 when I was about 15 years old, while I was grazing my cows at the foot of a mountain, here in Ratanakiri, I fell asleep.

“Suddenly I was awakened by a woman singing very sweetly to me. She said she was my mother and cradled me in her arms. Then there was a bright light and then the woman said she was Kon-sa-im and would always be in my life before disappearing.

“Since then, I started having dreams and in the dreams Kon-sa-im tells me who I should heal and how to heal them.”

Kweh Tien then said he never likes to show off his healing powers.

“Kon-sa-im told me to be always humble with my magic and only heal people when I am invited to do so.”

Kweh Tien told me that he also advised some of his patients to seek treatment in the health centres or hospital.

“Traditional healing and western medicine can complement each other. We are not in competition,” he explained. 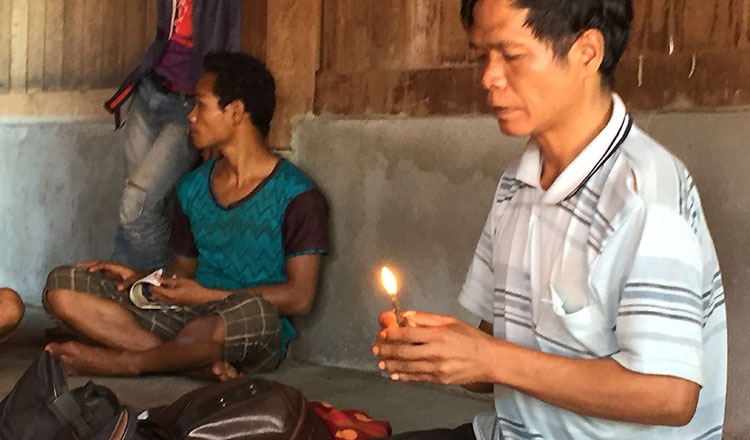 Two years later, I meet him again in Ke Chong commune. I am now almost full-term in my pregnancy.

I asked him if the baby was going to look more like me or the father.

“When the baby is born, come back and stay with me for a week,” he said. The Tampuan healer did not go into much detail but said there were some protection rituals he would like to do. One of the things needed was my newborn son’s umbilical cord, so I was instructed to tell the doctor not to throw it out.

We just sat with him asking him how his life had been since the last time we met him. He said he was slowly building a bigger house for himself, telling us it’s also for those that are sick who could stay with him while they heal.

He also wanted us to know that there was too much animal sacrifice going on around him and really could not bear to see any more suffering of living beings.

“I’ve seen these animals suffer terribly during ritual sacrifices and for that reason I’ve asked all my followers to stop eating beef and buffalo meat.”

I suspect by this time next year I will once again make the trek to come and see him – only this time with a son in hand.

For Channthy at the Mothership

Worth a thousand words