Prime Minister Hun Sen has lashed out at a political analyst who accused the government of failing to honour the Paris Peace Agreement, saying that it was incorporated into the constitution.

Speaking to about 900 Cambodian people living in Switzerland on Tuesday, Mr Hun Sen said that the spirit of the Paris Peace Accords was placed into Cambodia’s constitution.

He said that political analyst Lao Mong Hay, who claimed to be champion of the Paris Peace Agreement, interpreted it wrongly.

“He is bald-headed and analysed the Paris Peace Agreement stupidly and it could bring about wrong thinking,” Mr Hun Sen said. “If you want to analyse it properly, you have to base it on a middle philosophy.”

“I want to tell you that the Paris Peace Agreement was replaced by Cambodia’s current constitution,” Mr Hun Sen added.

He said that the spirit of accords was enshrined in the constitution which states that Cambodia upholds liberal multi-party democracy. 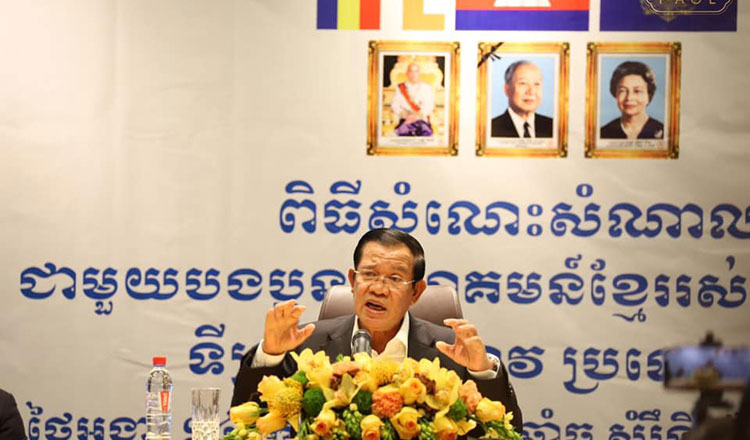 Mr Hun Sen spoke for about three hours on the accords, signed to end decades of armed conflict.

Mr Mong Hay said that the agreement’s clauses on the country’s sovereignty, territorial integrity, human rights obligations, and on the monitoring of human rights by the UN High Commissioner for Human Rights, could not be incorporated into the constitution.

“And those on the mechanisms for the settlement of the accords’ violations cannot be incorporated in the country’s constitution,” Mr Mong Hay said. “All these instruments were signed altogether on October 23, 1991 and have been known as the Paris Peace Accords or Agreements of 1991. They do not carry any expiry date, and, to my knowledge, no signatory has publicly notified its denouncement of these accords.”

CPP spokesman Sok Eysan said yesterday that the accords became invalid after the United Nations Transitional Authority in Cambodia pulled out of Cambodia in 1993 since its spirit was incorporated into the constitution.

Mr Esysan also accused the former CNRP of violating the agreement by colluding with a foreign country in an attempt to overthrow the government through a colour revolution.

“The stance of the Cambodian People’s Party is to honour the Paris Peace Agreement. We are struggling through all obstacles to implement this agreement,” he said.