More than 100 people representing hundreds of families in Kratie province descended upon Samaki Raingsey Pagoda in Phnom Penh yesterday to await a resolution from the Land Management Ministry over their land dispute.

The group, which hailed from Kratie’s Pi Thnou commune in Snuol district, is locked in a land dispute with the Memot Rubber Plantation company.

Representatives of the group said they have been in Phnom Penh for three days seeking intervention from relevant ministries, noting that a resolution from provincial authorities is taking too long.

In March, a clash between residents and security forces in Pi Thnou commune over the land dispute resulted in several people being injured. The incident prompted residents to gather in Phnom Penh instead.

Phin Thea, one of the representatives, said that the group has come to Phnom Penh more than ten times to seek an intervention from the Land Management Ministry and other related authorities regarding their dispute.

Mr Thea said they were repeatedly told to return to their province after authorities in Phnom Penh verbally promised to resolve their issue. 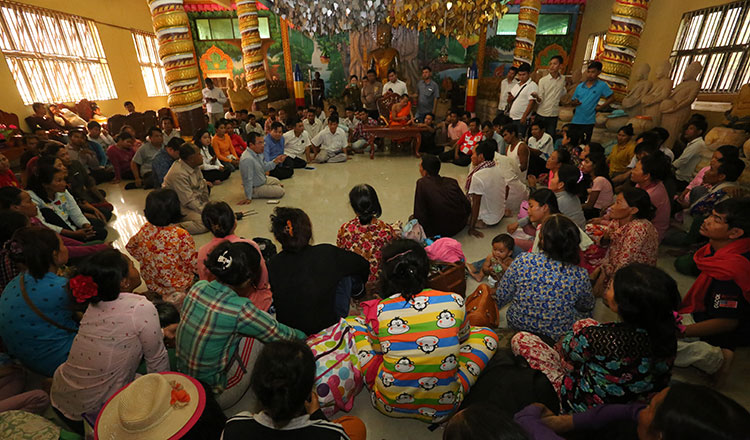 “We have been here for three days already. The ministry and provincial-level authorities have also met some of us. They promised to solve the issue, but there hasn’t been any result,” he said. “We are asking the ministry to issue a letter to certify the promised resolution to end the dispute, but ministry officials refused. We will continue to be here until we get a solution.”

Chan Sros, another representative, said people are living without land, affecting their livelihoods as officials drag their feet while finding a resolution.

“We are facing difficulties – we have no money, so we came here,” Ms Sros said. “If they do not solve it for us, we will not go back to Kratie.”

The villagers want two and a half hectares of land carved out for each family in order to farm after the Memot Rubber Plantation company destroyed their original farms.

Kratie provincial Deputy Governor Khan Chamnan met the representatives yesterday and said that a resolution is in the works for more than 1,600 families locked in the land dispute.

“We already have the resolution and we are preparing for those that will receive land – which is almost complete. We can only wait for ministry approval and request the government to classify the land as a social land concession,” Mr Chamnan said. “We have worked continuously for the people, but I will try to explain to them that the procedure takes time.”