The statement noted Mr Hun Sen’s attendance at the ASEM summit, highlighting outcomes from meetings he held with other world leaders.

It said that world leaders held discussions on a wide range of issues promoting growth, connectivity and 2030 Sustainable Development Goals.

The statement said Mr Hun Sen shared his views on the 2030 SDGs by stressing the need for a coordinated framework to address global challenges that could impact economic and social growth.

“The Prime Minister reiterated his support for multilateralism […] particularly in strengthening ties with the World Trade Organisation,” it said. “Asia and Europe should further strengthen cooperation to ensure peace, security, development and basic human rights.”

“He must stop holding the Cambodian people hostage. Without these privileges, Cambodian-made products would not be competitive in international markets,”Rainsy said, ignoring the fact that he was at the forefront of those calling for sanctions.

EU Trade Commissioner Cecilia Malmström informed the government earlier this month that the EU has begun the process of withdrawing the Kingdom’s EBA status, which could take up to 18 months. 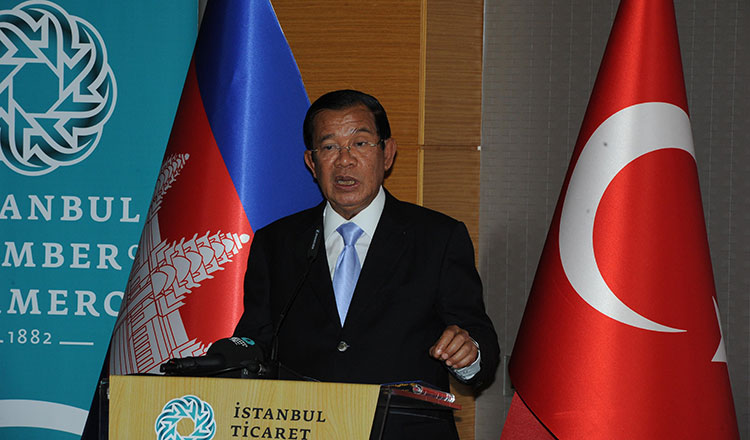 The ministry statement said during Mr Hun Sen’s meet with Ms Mogherini, both sides agreed to continue discussions over the EBA scheme and the Kingdom’s access to it, which is being reviewed based upon perceived human rights abuses and democratic setbacks in the country.

The EU is Cambodia’s main export destination, accounting for about 40 percent of all Cambodian exports. These exports have risen sharply in recent years, increasing by 227 percent between 2011 and 2016, reaching $5.7 billion.

The garment sector exported 46 percent of goods to Europe followed by the United States, Japan and Canada. The loss of the preferred status would incur $676 million on last year’s export revenue.

Political analyst Lao Mong Hay said political disputes between Mr Hun Sen and Mr Rainsy have spilled onto the international stage, noting that Cambodia will lose regardless of who claims victory.

“It’s not good for Cambodia’s international reputation and standing when they wash domestic linen abroad,” he said. “It has divided the international community that helped fix Cambodia a generation ago.”

“Any suspension or withdrawal of the EBA would be catastrophic to the nation,” Mr Mong Hay added. 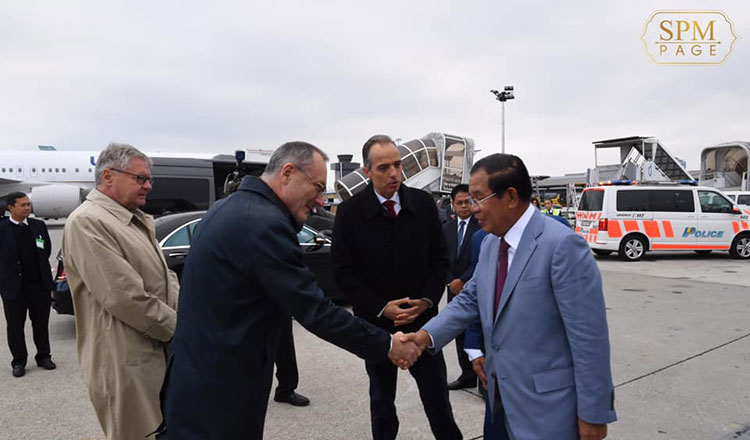 “It is reality that Cambodia will host the 13th ASEM meeting in 2020 and the whole nation is proud,” Mr Eysan said. “Only Sam Rainsy has taken the Cambodian people hostage in order to grab power.”

The Garment Manufacturers Association in Cambodia has written a letter to European Parliament President Antonio Tajani, stating that the possibility of revoking Cambodia’s EBA preferred status was a “shock” to the private sector in Cambodia.

“The European Union is an important trading [partner] for Cambodia […] more than 46 percent of our garment exports is to the EU,” GMAC secretary-general Ken Loo said in the letter dated Saturday and released to the public yesterday. “We remain optimistic that our sector will not be subject to any sweeping sanctions. Our proven track records in upholding the 15 conventions relating to human and labour rights […] is a testament of our commitments.”

“We appeal for your careful action and thoughtful decision,” he added. “GMAC stands ready to provide you with further facts you may require during your monitoring process.”

Ministry dismisses sand dredging as cause of riverbank collapse