Police in Siem Reap province’s Varin district have handed over unexploded ordnances to a demining NGO for destruction following their discovery on Saturday and Sunday.

Ov Kork, chief of staff with district police, said the ordnances were still active and needed to be destroyed as soon as possible.

“We collected them from three communes, Sre Noy, Lovea Kraing and Trapaing Prasat,” he said. “They were left over from the Khmer Rouge, but they are still active. They were given to the NGO Cambodia Self Help Demining for destruction.”

Mr Kork said the ordnances were collected over two days in the district, noting that Varin district is an area abundant with unexploded ordnance due to the fact that it is a former Khmer Rouge war zone.

“A lot of ordnances remain that need to be demined because it used to be a stronghold for the Khmer Rouge,” he said. “People frequently report discoveries.” 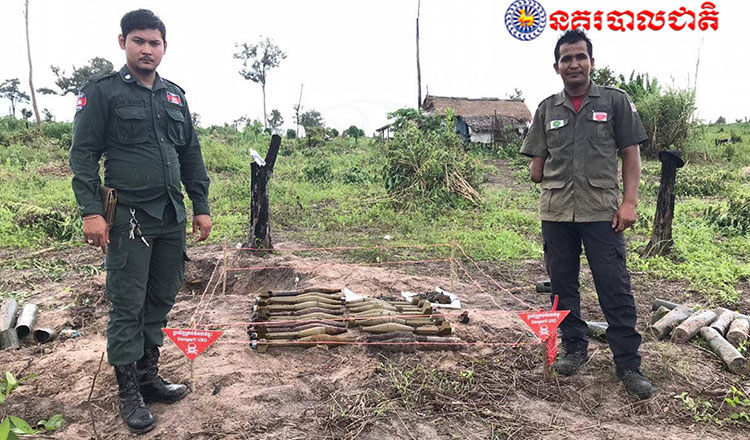 According to a National Police Report, the ordnances found over the weekend included two DK-82mm shells, one 60mm shell, 18 B40 bombs, and about 20 kilograms of old and rusty AK-47 bullets.

Captain So Sokhon, Sre Noy commune police chief, said farmers reported them to his police after they spotted them while ploughing their land.

“Some of these ordnances were found in Sre Samuth village of Sre Noy commune because it used to be a war zone,” he said. “They were found on farmlands while farmers were working.”

The officials took donor representatives from Australia, Switzerland, Canada, Japan, the Netherlands, the United States and UNDP on a fact-finding mission to Battambang province.

According to a CMAA report, more than 1,700 square kilometres of land has been cleared since 1992. In 25 years of demining, Cambodia has cleared 1,036,376 anti-personnel mines.

Pagoda grotto to be tourist site