The company paid $76 million in taxes, levies and regulatory fees last year. Its tax payments alone made up 3 percent of the state’s tax income.

“We also invested $80 million in capital expenditure to enhance our network infrastructure and $139 million in operational expenditure. We spent over one percent of our annual revenue (approximately $3 million) in corporate social responsibility programmes,” he said.

Speaking at the launch of the company’s Sustainability Report for 2017 on Friday, Mr Hundt said the investment by Smart Axiata, which is 82.5%-owned by Kuala Lumpur-listed Axiata Group Bhd, shows its commitment in expanding coverage and data capacity in Cambodia.

“I am particularly proud of the increase in our national economic contributions and strengthened mobile data leadership. We achieved a major first in introducing 4G+ with high definition voice and 4.5G. We also promoted local digital entrepreneurship in a meaningful way, including through the $5 million Smart Axiata Digital Innovation Fund and the SmartStart: Young Innovator Programme.

“The annual SmartEdu scholarship intake was also increased to 20 students. Furthermore, many internal and external digitisation initiatives were accomplished in line with our vision of becoming Cambodia’s digital champion by 2020,” he said.

Last year, the company focused on contributing to national economic growth, enriching lives through advanced technology and digital inclusivity, and driving the local ecosystem as well as creating value for the underserved. 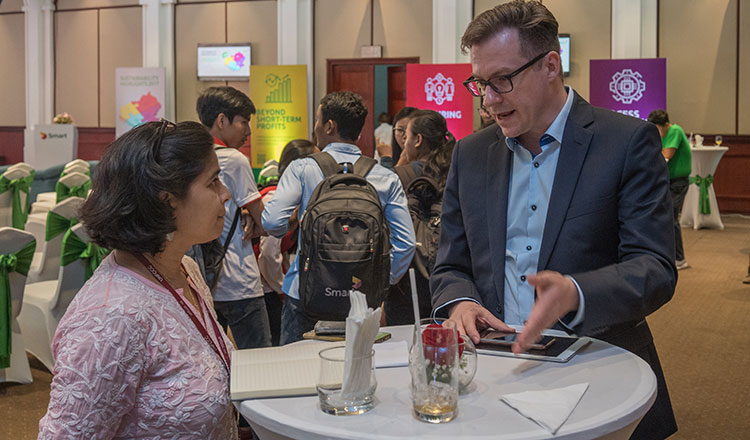 Speaking on competition among telcos, Mr Hundt said, “It is important to focus on long-term sustainable value creation, and not just short-term profits. In order to do that, all operators should focus on sustainable growth.

“If all operators focus on sustainable growth, the industry would become more profitable and it would benefit stakeholders.”

He said this is important in order to have a level playing field that enables the company to see better revenue and profit growth, and allows it to increase its contribution to state coffers.

He also said the revenue growth for this year will definitely be higher than the $268 million achieved in 2017. “That is very good because, at the end of the day, it flows back into the society for investment,” he added.

Although Smart Axiata is now looking ahead at what comes next in tech, particularly the advent of 5G technology, the CEO said the company will continue to invest in its 4G as well as 4.5G infrastructure.

“Everyone is talking about 5G – we too are accelerating our preparations on this area as we continue to be the leader of advanced mobile technologies. At the same time, 4G and 4.5G infrastructure or investment continues to be a priority for us as our data traffic is going through the roof.

“We have a lot more data customers and that requires increased investments to the network. That is what we have been doing and will continue to work on for years to come,” Mr Hundt said.

Minister asks US companies to invest in Cambodia