Sambo district, Kratie province – Authorities here have banned villagers from making and selling rice wine after five people died and many others were hospitalised due to methanol poisoning.

Health Ministry spokesman Ly Sovann said 78 villagers have been affected by the tainted rice wine, including the five who died.

As of yesterday, two victims remained in hospital in Phnom Penh and 42 villagers have been allowed to go home.

The other 29 villagers remain at the provincial hospital.

A team of Health Ministry officials remain in the district and have sent samples of rice wine for laboratory tests in Phnom Penh.

The victims were from two communes, Koh Knhe and Boeng Cha, in the district.

In Boeng Cha commune, Korch Sok Heng, who made the rice wine, is being questioned by police and will likely be sent to court for further questioning, according to Noun Sarin, a deputy district police chief.

Mr Sovann said the ministry officials are tracking down more villagers who drank the tainted rice wine in different communes and sending them to hospital as a precaution.

“Initial test results are positive for methanol,” Mr Sovann said. “Now we are awaiting further test results for the exact levels of methanol.”

“In the meantime, we have concluded that the villagers were poisoned by rice wine,” he added.

Mr Sovann said the rice wine maker Mr Sok Heng did not craft the wine properly and added too much methanol to make it stronger, blaming him for the latest poisoning case in the province.

In July, three people died, while 62 people were hospitalised due to methanol poisoning from rice wine in the province.

This follows a case in May, when 13 villagers in Kratie province’s Chetr Borei district were killed by methanol-laced rice wine.

“There are two rice wine producers in the commune, and there are many sellers, and those sellers order from different producers both inside and outside the commune,” he said. “Mr Heng has been making the wine for three years and has never had any problem.”

“In my commune, this ban could be forever,” he added.

Pen Lina, spokesman for the Provincial Hall, said the ban is only temporary until the latest case is resolved.

“We are educating villagers about methanol risks and safe ways to make rice wine,” he said. “Because producers want stronger wine, they add methanol which affects the health of consumers.”

Mr Sok Heng’s sister-in-law Thanh Sina defended him, noting that he did not intend to harm anyone with his wine and did not add any substances to it.

“Villagers were already sick and are now blaming their illnesses on his rice wine, but it’s not true,” she said.

Ms Sina said her brother-in-law began making the wine three years ago to buttress his pig farm business, noting that the pigs have many times eaten leftover fermented rice and never died.

“We gave leftover fermented rice to our pigs, and they had no problems,” she said. “He made the wine the same way as everyone else.”

Ms Sina noted that Mr Sok Heng’s wife and children left home to visit him at provincial police headquarters in Kratie city, about 45 kilometres away.

“I beg the court to reduce any penalty for my brother-in-law,” Ms Sina added. “He did not flee, so please pity him.”

Sorn Kun, a rice wine seller in Boeng Cha commune, said the wine is popular in the area because it is cheaper than beer and also stronger.

In a few days, especially if there is a festival, she can sell 30 litres of rice wine, she noted.

Ms Kun said she sold wine bought from Mr Sok Heng, but her batch was brewed two weeks ago, while the batch that poisoned villagers was made on Wednesday. 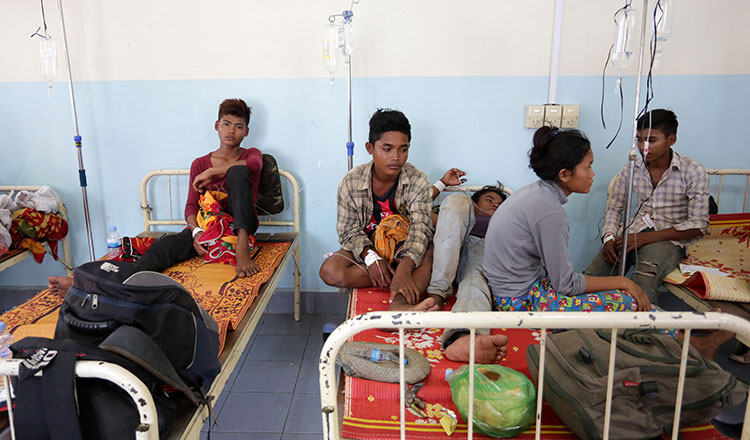 “The villagers poisoned by the wine drank the batch made on Wednesday,” she said. “We know this because the following day people began falling sick and three died.”

Health Ministry officials seized the wine from her shop, she added, taking some for testing and destroying the rest.

Ms Kun said the seizure did not upset her because she wants villagers to be protected, going as far to say that the wine should be banned forever as it often leads to domestic violence, not just poisoning cases.

With dozens of villagers from the commune still in hospital, its roads remain empty and quiet, and those who remain are trying to understand what happened.

Some who drank the tainted wine complained that it was sour, while others in hospital say that it was tasteless, but stronger than usual.

Those in hospital said they felt dizzy, had headaches and vomited after drinking the wine, leading to unconsciousness.

Sim Noun, a security guard in the village, was hospitalized after drinking the wine at a funeral ceremony.

Mr Nuon’s neighbours also drank the wine, killing both the husband and wife. 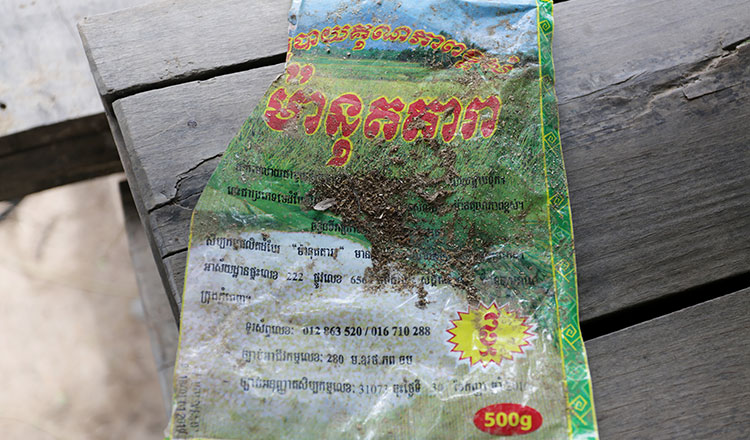 “The husband said that he was dizzy and his eyes could not see anything. He called his wife for help but she could not help as she was feeling sick as well,” he said.

While the husband received coining from a relative, he died, and the wife was sent to hospital, where she later died, Mr Nuon said.

Mr Noun said he does not blame Mr Sok Heng for the poisonings, noting that villagers chose to drink the wine and Mr Sok Heng was not trying to hurt them.

Ek Phalla, a villager who drank the wine while harvesting rice, said she did not feel any serious symptoms after its consumption.

However, officials instructed her to go to the hospital nonetheless.

“I will stop drinking the wine now,” she said. “This time I was just hospitalized, but what about next time? I don’t want to die.”