Battambang province is better known as the last bastion of colonial architecture in Cambodia, but outside of the provincial centre a booming market is known for one thing: Prahok.

Ek Phnom district, Battambang province – The first time Dy Chamroeun tried making prahok, she could not stand the stench and was forced to mask her face, battling through the stinky process to earn a living for her family.

Sitting in the Phsar Prahok here as she chops up mounds of fish, Ms Chamroeun says she eventually got used to the smell and now runs a stall in the market, one of the biggest prahok production facilities in the province which has become a tourist attraction.

“The first time I made it, it was very hard for me. But we needed the money, so we had to do it,” she says. “After a week, I became accustomed to it. Now it’s being transported to almost all of the provinces in the country.”

Anyone driving through this district will first notice the strong smell of fermenting fish emanating from the market.

Better known as the last bastion of colonial architecture in Cambodia, Battambang is also becoming known for its prahok market, where about 50 stalls pump out hundreds of kilograms of the quintessential Khmer dish daily.

The market has become an attraction in the province, and is even listed as a tourist site by Trip Advisor. Many tourists come to prahok market to find out more about traditional Khmer cooking and its ingredients.

“It’s called Phsar Prahok for a reason,” says Ms Chamroeun. “This place has been selling prahok since the 1990s because it is located near a river that accommodates various types of fish.”

“There are a lot of foreign tourists coming to visit this place,” she adds. “They come in tuk-tuks, taxis and motorbikes to visit. At least 40 to 50 tourists from different nationalities visit the area daily.”

Ms Chamroeun says the base ingredient for her paste, which is fish, is finely chopped and mixed with salt before adding water to kickstart the fermentation process. Once combined, this mixture is then left to ferment in clay jars. The process takes about two weeks to complete.

“These catfish are imported from Thailand. We actually have these fish in the country, but ours are not as big as those from Thailand,” she says. “We make fermented freshwater prawns and fish – we chop about 700 kilograms per day.” 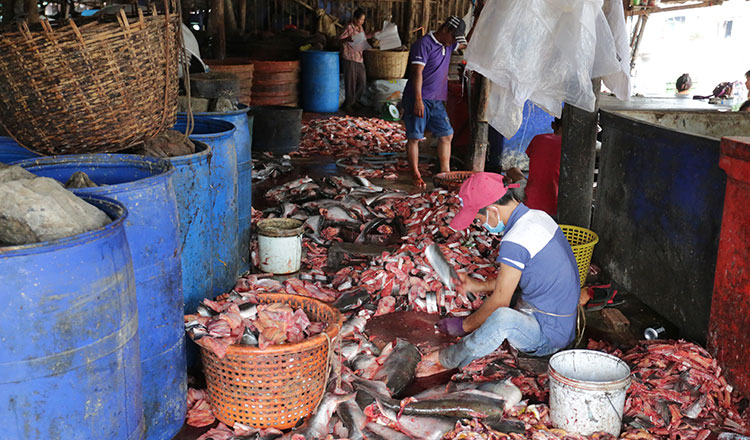 “We make prahok on a daily basis as long as we have fish. Sometimes, we fulfil special orders, other times we make prahok in order to be resold later,” Ms Chamroeun adds. “It’s all natural and we use traditional hygienic methods.”

The prahok she’s making today is meant to be sold as wholesale to retailers around the country, she says.

Considered the quintessential ingredient in Khmer cooking, prahok is fermented fish paste and has a distinct flavour that distinguishes Khmer cuisine from others in the region.

Similar to cheese, the longer the paste is left to ferment, the more pungent it gets. The final product, which resembles a greyish paste, has a wide variety of uses. The paste can be used as garnish, dip or even a base for complex sauces, stir fries and stews.

Not far from Ms Chamroeun, Chiek Ly scours through leftover fish organs prepared by ten of her employees. Ms Ly says her main markets are Takeo province and Phnom Penh.

“It is meant for domestic customers in Takeo and Phnom Penh. Customers can choose to use the prahok however they please – either raw or steamed,” she says. “In total, we can supply hundreds of tonnes of it. I can employ more than ten people. We have fish to make the paste almost year-round.”

Ms Ly says she sells her prahok for about $1 per kilogram after buying the fish for about $0.75 per kilo.

“The weight of the final product is lost after we descale the fish, mingle it with salt and ferment it for about half a month,” she says.

In addition to utilising fish to make prahok, Ms Ly says she also takes the inner organs to be sold to farmers, while fish roes are sold to restaurants and food vendors.

She says the best time to sell prahok is between May to November because of the limited availability of the fish used.

When asked about foreign tourists, Ms Ly playfully says they should start being charged to enter the market.

“Maybe if we restrict access to the market and demand an entrance fee from foreign tourists, they will still want to go inside because they’re curious about how we make prahok,” she says in jest.

However, the rising reputation of the market has brought some negative consequences as concerns over hygiene and chemicals in the prahok have been raised on social media.

The online criticism has prompted the National Police to instruct local authorities to inspect the market. 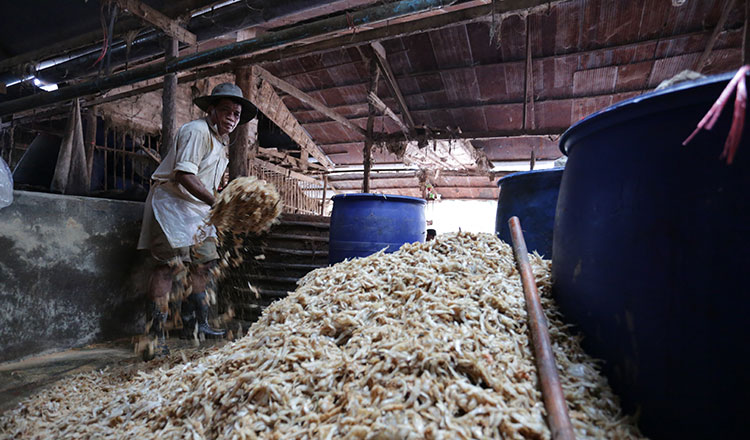 “A lot of foreigners come visit the area and that is what we are paying attention to as well. We have discussed the issue of hygiene and delegated work to district authorities to look into it,” Mr Bunrith says. “We are looking for a rubbish collection company to dispose of the rubbish produced there, while potholes around the market are going to be fixed.”

“The vendors have also been educated on how to properly pile rubbish,” he adds. “Regarding the prahok itself, the district administration has been told to improve it.”

District Governor Mao Sophal says his administration is working on installing sewage pipes in order to properly dispose of water and reduce the smell of prahok.

“Installing the sewage pipes is almost finished, and it will help eliminate the bad smell,” Mr Sophal says. “As for rubbish collection, the company responsible hasn’t been collecting on a regular basis – causing rubbish to pile up.”

As for the quality of the prahok itself, Mr Sophal says Camcontrol is in charge of determining if producers are adding chemical perseverates. Provincial Camcontrol officials could not be reached for comment.

For Ms Chamroeun and Ms Ly alike, the extra attention is of no concern as they are both confident in their products and they way they are made.

Ms Chamroeun says her ingredients are very simple and that there is no room for preservatives in her product.

“It is not true because after the fish are descaled, we wash them several times with water and we only add salt,” she says. “I guarantee that we do not use chemical substances to make prahok. We make it naturally and traditionally.”