The Defence Ministry has announced that the United Nations has ranked Cambodia 29th among 122 countries that have sent peacekeeping forces to conflict areas around the world.

Last year, the UN ranked Cambodia as 32nd for the most troops sent abroad. Cambodia also ranked 17th out of 122 countries that have sent the most women on peacekeeping missions.

“We are proud to be ranked as the 29th country that have sent the most peacekeepers,” Gen Phat said. “We are also ranked number 17 for having sent many women on peacekeeping missions.” 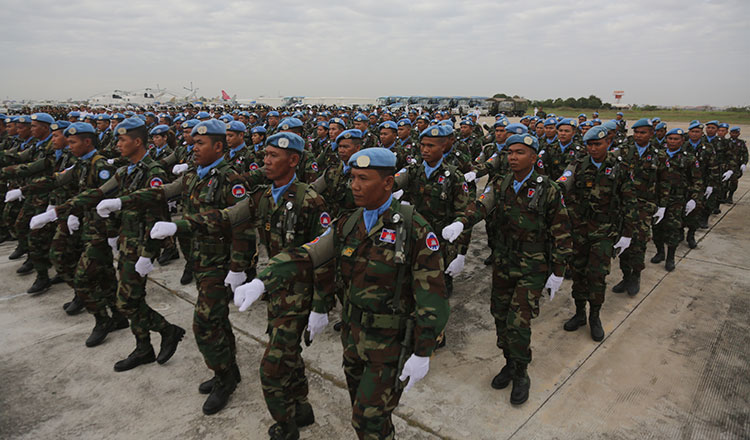 About 1,000 soldiers are rotated annually. There are currently 811 peacekeepers abroad, including 67 women.

Gen Phat added that the Royal Cambodian Armed Forces will continue to cooperate with other countries to counter terrorism, provide maritime security, provide disaster relief and send its troops on peacekeeping missions.

Kosal Malinda, spokeswoman for the National Centre for Peacekeeping Forces and Explosive Remnants of War Clearance, said Cambodians should be proud of the achievement.

Ms Malinda noted that Cambodia is waiting for a response from the UN to send more peacekeepers to South Sudan.

“There is a plan to send 46 military police officers,” she said. “The number of peacekeepers abroad will increase to 857.”

He added that UN peacekeeping forces are sometimes faced with unprecedented challenges from insurgents in conflict zones.

“We are sincerely indebted to the sacrifice of UN peacekeeping heroes,” Mr Hun Sen said. “Their death and sacrifice have not [deterred] our commitment to further contribute to this great mission.”

Last year, a Cambodian peacekeeper died due to malaria, while in May, four peacekeeping personnel died in the CAR during an attack by Christian insurgents in the southeastern part of the country.

In response, the UN granted $70,000 in compensation to each family of the fallen soldiers.

More than 200 Cambodian military personnel will soon replace a previous batch of peacekeepers stationed in the Central African Republic who are due home at the beginning of November.

The new peacekeepers will depart from Cambodia on November 3, while the previous batch is expected to return on November 5.

Ms Malinda said a total of 216 members of the Royal Cambodian Armed Forces will join the United Nations’ peacekeeping mission in CAR.

“If the plan doesn’t change, more than 200 peacekeepers will leave Cambodia on November 3,” Ms Malinda said. “If the date changes, there will only be a one or two-day delay.”