The South Korean Immigration Service has issued an ultimatum to all undocumented workers to leave the country within six months or face legal action.

The immigration department issued the notice to all foreign workers who have overstayed their visas.

About 54,000 Cambodians work in South Korea, while 4,000 more are being requested this year by the South Korean government. It is unclear how many of them are undocumented.

The notice said the South Korean Justice Ministry will reinforce measures against illegal employment in industries such as construction and adult entertainment.

“[Undocumented] foreigners need to voluntarily leave the country by March next year,” it said. “You will not be subject to [a blacklist], regardless of the overstay period.”

The South Korean Immigration Service added that those who failed to remove themselves from the country by March are subject to be barred from entry for up to ten years. It said that anyone caught in a crackdown would be deported immediately.

“Those who voluntarily depart will not have their information shared to their home country,” the immigration department said. “Foreigners who are caught working illegally will be deported immediately regardless of any status.”

South Korea has recently implemented its “One strike out” policy in order to deter illegal migration. The policy applies to students, family members of migrants and undocumented workers. 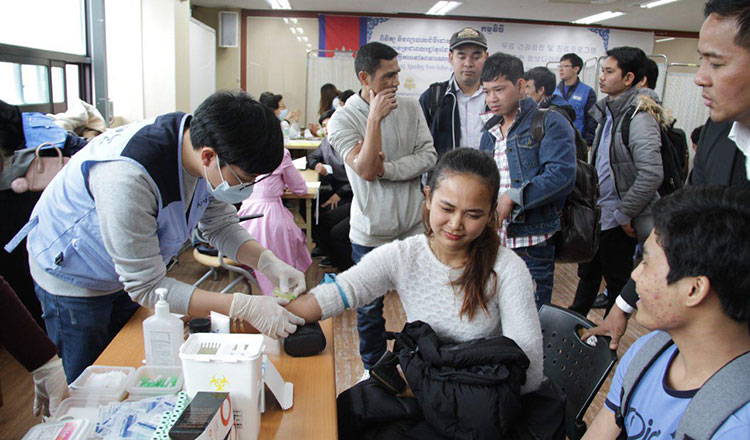 “If South Korea takes strong action against illegal foreign workers, the workers could face imprisonment and [deportation],” he said. “I think that the Cambodian government should think about this issue and help workers gain legality or help them return home.”

Mr Thehoya noted that the Cambodian embassy in South Korea has to protect Cambodian workers regardless of legal status.

“The Cambodian embassy should inform our workers in South Korea so that they know about what to do in order to avoid problems with South Korean authorities,” he said.

Long Dimanche, Cambodian ambassador to South Korea, could not be reached for comment yesterday.

Cambodian workers in South Korea earn about $1,200 per month working in the agriculture sector, while those in the industrial sector earn up to $1,800 per month. About $300 million are annually sent to relatives back home.