The Agriculture Ministry’s Fisheries Administration is drafting a directive to turn more sections of the Sre Ambel river system into conservation zones for Royal Turtles following successes reported by the Wildlife Conservation Society and administration monitoring teams in existing zones.

The WCS reported last week that since their release in November, the monitoring teams found that all wild Southern River Terrapins are thriving in the river system.

It said that the monitoring data shows that one turtle has even travelled to another river system nearly 100 kilometres away from the release site and another was captured by a fisherman and handed over to the project. The released turtles are now dispersing over a wider area.

Mr Vibol noted that the directive will come into effect very soon. 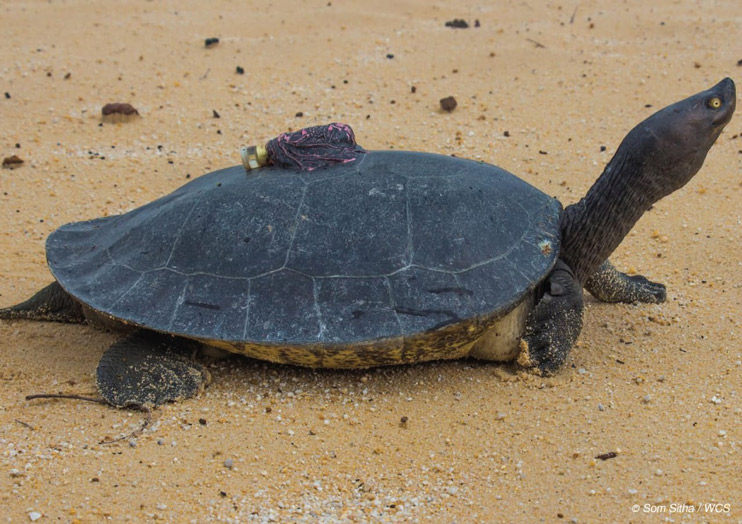 He said that the programme released two batches of Royal Turtles, consisting of equal numbers of sub-adult males and females, into their natural habitat in 2015 and 2017.

“Our post-release monitoring program has showed that control of threats means that there is high survival rate of turtles, bringing hope that we can restore the wild population,” he noted.

The Southern River Terrapin, also known locally as Royal Turtle, is one of the world’s 25 most endangered freshwater turtles.

It is listed on the International Union for Conservation of Nature Red List as Critically Endangered, and was designated as Cambodia’s National Reptile by a royal decree in 2005.

The Royal Turtle was believed extinct in Cambodia until 2000 when a small population was rediscovered by the Fisheries Administration and WCS in the Sre Ambel river.

Since then, WCS and the administration have been working together to protect the species from extinction. Conservation activities include the nest protection programme, law enforcement, and monitoring.

“This year, we have not released any Royal Turtles yet,” Mr Sereyratha said. “In Cambodia, the Royal Turtles have only been found in the Sre Ambel.”