Kampong Cham Provincial Court yesterday charged a farmer over the brutal murder of a man and his two sons in Batheay district on Sunday.

Major Keo Sitha, deputy district police chief, identified the accused as Em Phean, 41, living in the district’s Trob commune. He was charged with intentional murder and faces up to 15 years in prison if convicted.

Maj Sitha identified the victims as Ny Non, 53, and his sons Non Chhorvoan, 19, and Non Vy, 22, all farmers living in the same village as the accused.

He noted that they died after Mr Phean hacked them with a machete on their heads, hands, ears, and necks.

Maj Sitha said that at about 5pm on Sunday, the accused and Mr Chhorvoan became drunk on rice wine in his house and started arguing.

He noted that during the argument, Mr Phean took a machete and slashed Mr Chhorvoan on the head, causing slight injuries.

Maj Sitha said the victim rushed out from the accused’s house and sought help from his father and elder brother. 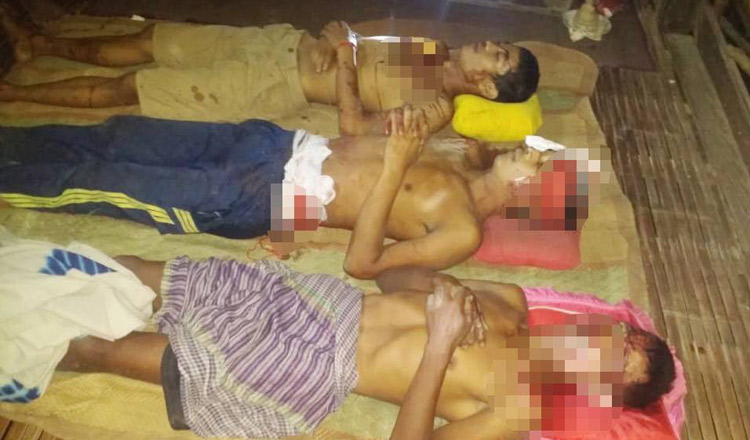 He added that the three of them then armed themselves and went to the accused’s house.

“When the accused saw the three of them carrying axes and large pieces of wood he feared that they came to kill him,” Maj Sitha said. “He hid and used his machete to hack them several times when they entered his house.”

“The two sons suffered serious injuries on the head, ears and neck and died on the spot. Neighbours who intervened took Mr Non to the provincial referral hospital for treatment but he died on the way,” he added.

Maj Sitha noted that after hacking the three men, the accused fled his house, but was caught by villagers the same evening and handed over to police.

Police then seized the machete from him.

Captain Sok Vuthy, a provincial police officer, said the accused admitted he hacked the three men, but said he did not intend to kill them.

“He said that he hacked them to defend himself because they were carrying axes and pieces of wood to kill him,” Cap Vuthy said. “He claimed that if he had not hacked them first they would have killed him.”

He noted that Mr Phean will be sent to prison today pending his trial.