The European Union is a key economic partner in Cambodia, with preferential access to European markets a key element of the Kingdom’s robust growth in recent years, said European Union Ambassador George Edgar.

Attending an event yesterday organised by the Club of Cambodian Journalists (CCJ), Mr Edgar said strong economic ties with the European Union have allowed Cambodia to grow at a fast pace.

“Economic exchanges are a driver for growth. EU businesses create jobs in Cambodia: they have a long term perspective, stimulate innovation and promote socially responsible and environmentally friendly practices. EU businesses are a strong and reliable partners for Cambodia.

“Access to the European market has driven the very rapid expansion of Cambodia’s exporting industries, in particular garment and footwear. 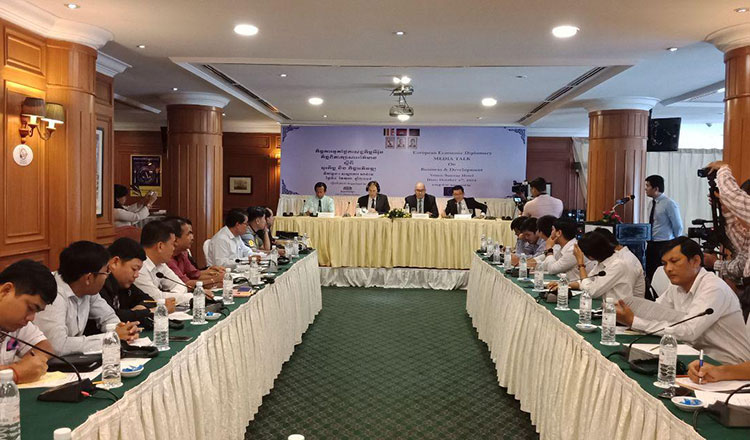 “At the same time, Cambodia’s exports to EU have grown very rapidly. Access to the EBA (Everything-but-arms) scheme has allowed the country to gain a competitive advantage, grow the economy and generate employment,” Mr Edgar said.

Tassilo Brinzer, vice chairman of the European Chamber of Commerce and president of the German Business Group in Cambodia, said European businesses create many jobs in the Kingdom and offer good salaries.

“The business environment here is good, so we are trying to attract more European investment in the country,” he said, adding that about 500 companies from the EU are present in Cambodia.

The EU is Cambodia’s top export destination, accounting for 40 percent of all its exports. These have risen sharply in recent years, increasing by 227 percent between 2011 and 2016, and reaching €5 billion in value last year alone. Cambodia now is second amongst all EBA beneficiaries in terms of trade volume.

Longmate to ship 30,000 tonnes of banana to China