Home - Graves without a name

Graves without a name

Cambodia’s acclaimed filmmaker Rithy Panh has produced yet another emotional masterpiece through his ‘Graves Without A Name’. This latest documentary gives a more moving and intimate take on the historic Khmer Rouge regime and how he is continuously striving for peace and healing. Say Tola witnessed the screening of the documentary recently and speaks about the film’s rightful spot as the country’s entry to the 91st Academy Awards for the Best Foreign Language Film category.

Every time Cambodia gets mentioned to outsiders – yes, every single time – people automatically associate it with the brutal slaughtering, mass killings, starvation, forced labour, arranged marriages and all tragic stories. Of course, the not-so-distant histories of Khmer Rouge regime and the civil war are still very much vivid in the minds of everyone. The shock, fear, desperation and pain remain in Cambodia’s memory.

But for those who have witnessed how Year Zero changed the Kingdom’s landscape – in the worst possible case – the confusion and longing for their loved ones who died unknowingly in the years-long chaos is an added burden they carry on their shoulders every waking moment. How exactly did they die? Why did they not survive? Where are they buried? Have they attained peace in the after-life? These questions can go on and on.

Renowned filmmaker Rithy Panh, a survivor of the 1975-1979 genocide, released a more heartfelt and painful follow-up to his Oscar-nominated documentary “The Missing Picture”. In his latest documentary, “Graves Without A Name”, Rithy Panh tackles a more moving and meditative take on his quest to attain some measure of closure for his very own anguish.

On September 14, Cambodians and expatriates were treated to an emotional rollercoaster ride with the first ever screening of “Graves Without A Name” at Major Cineplex of Sorya Center Point. The audience saw more empirical evidence and facts of how the Khmer Rouge regime destroyed the identity of a country that used to stand proud for its rich culture and arts.

Throughout the film, the filmmaker explores his personal trauma as a 13-year-old boy who was not supposed to see cruelty at a very young age. Rithy Panh also gives a clearer picture of how he went to religious ritual ceremonies to find his kin’s burial grounds at the aftermath of the tragedy. Knowing that he shares the same pain with the other victims of Khmer Rouge, Rithy Panh also takes the time to hear out farmers and other people as they speak on their ordeal – witnessing the deaths of their families and getting thrown into farms all day and night.

The film opens with Rithy Panh himself getting his hair shaved in a small provincial temple. It is then followed by a religious ceremony. He begins a spiritual redemption by walking across the field, bearing religious totems with the high hopes of locating the spots where his family members might be buried. He then goes to find new shamans who will communicate to his dead ancestors.

At the end of the documentary, we see Rithy Panh finding a tooth and a button from a cloth that could allow him to remember and reimagine the “origins, glances and names” of those departed loved ones.

“Graves Without A Name” will be Cambodia’s official submission for the Oscar Award next year.

And next year, Rithy Panh’s “Graves Without A Name” will be bringing the Cambodian pride as it has been officially named as Cambodia’s entry to the 91st Academy Awards for the Best Foreign Language Film, the same category his “The Missing Picture” was nominated for in 2014.

Mariam Arthur, member of Cambodia’s Oscars committee, shared how she was personally touched by the intimate way Rithy Panh has continuously delved into a very delicate and sensitive subject. 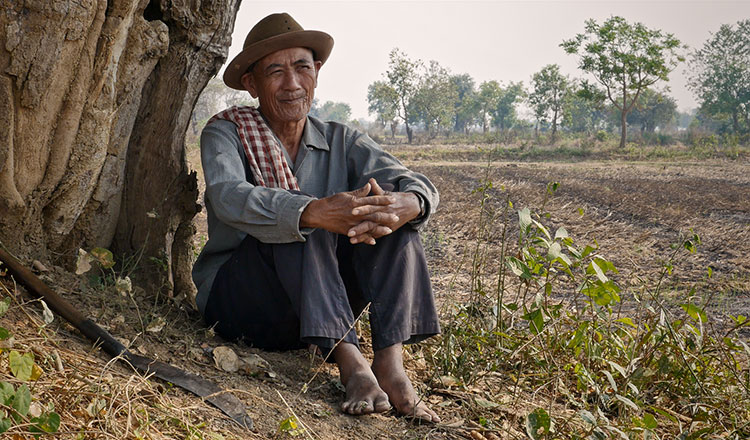 “I am very pleased that Mr Rithy decided to choose this film to submit to our committee so that we could vote on it and we hope we could send it for Oscar submission from Cambodia. It also does need help from local supporters since the film will be screened for seven days in local cinema theatres,” she said during September 14’s screening.

“Not all filmmakers can do what Mr Rithy can do. Most of films are scary, romantic, fun and entertaining. But the social reality this film has shown us really touches our hearts and souls.”

The Cambodian screening of Rithy Panh’s film was organised by the Ministry of Culture and Fine Arts. Pok Borak, director of Cinema and Cultural Diffusion Department, told the audience – a mix of Cambodians and foreigners from all walks of life – that Rithy Panh’s talent in filmmaking has brought Cambodia’s name out to the global stage.

He added, “we acknowledge that our film industry is still not at par with others. But Mr Rithy’s documents really introduced as to world recognition.”

With this new documentary, he further noted, shows historical facts about Cambodia not just to foreign audience but to young Khmers as well. The film is a creative and informative way to re-tell what Cambodia has gone through and how it has evolved into a much better nation after its downfall.

Tech Chan Rachana, a student from the Royal University of Phnom Penh, said he has been a longtime fan of Rithy Panh’s art.

“This film really conveys a lot of messages. What I have learned personally is that, people at that time died in a cruel manner. It is sad that most of those who survived genocide still do not know if their relatives are still alive or not, or even where they’ve been buried all this time.”

“I love the metaphor he used to tell the story to people in this generation like me. It is not really direct, but it does bring clear images and messages of what happened. It led me and the rest of the audience to think deeply about our own history,” Rachana added.

Filmmaker Rithy Panh’s works continuously give Cambodia the credits it is entitled to have – resilience from a cruel past and its gift in turning pain into beautiful kind of art. And whether or not he wins an Oscar for this latest masterpiece, Rithy Panh has already brought tremendous triumphs – and healing –for his beloved Kingdom.