Three face up to ten years in prison over mob violence

The three were arrested in March and charged with intentional acts of violence with aggravating circumstances and intentionally causing damage. If convicted on both charges, the accused could face up to ten years in prison.

Judge Samnath said that on March 11, Mr Sareth was driving in Russey Keo district. While Mr Sareth stopped at a traffic jam, a drunken man fell off of his motorbike near Mr Sareth’s car.

Witnesses said they did not see the incident occurring, but noted that the man shouted at Mr Sareth, accusing him of hitting his motorbike.

Other motorists joined to form a mob and pulled Mr Sareth out of his car and began hitting him with helmets, causing serious injuries. To escape the mob, Mr Sareth managed to get back into his car and flee the scene.

Mr Sareth fled into the city and crashed into two motorbikes near the Depo Market in Tuol Kork district.

Angry motorists, who saw the accident, drove their motorbikes in pursuit of Mr Sareth and finally stopped him near Preah Kossamak Hospital in Toek La’ak III commune. 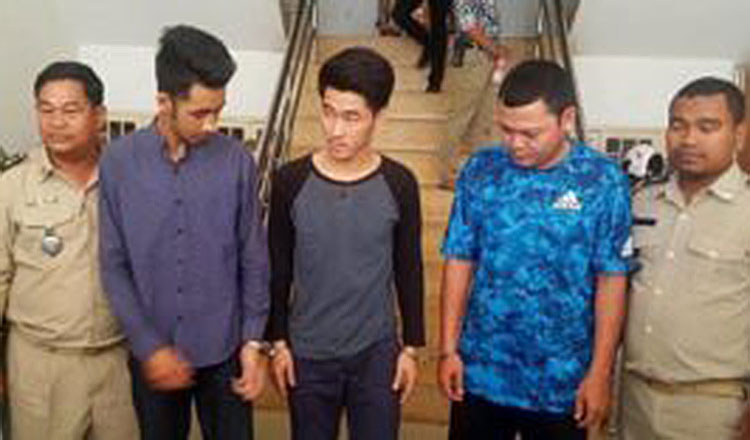 They proceeded to violently beat Mr Samreth, who was then hospitalised in Vietnam.

“After catching the victim, they proceeded to beat him some more, causing further injuries,” he said. “The victim lost consciousness and the mob destroyed his car and looted his property before fleeing.”

Mr Phally, Mr Vintheany and Mr Tithya all admitted to the crime during the trial yesterday.

They said they beat the victim and destroyed his car because they thought the victim was a Chinese national that hit a motorist and fled the scene.

However, the accused denied looting the victim’s property and requested the court to reduce their sentence.

“The reason why I beat the victim and destroyed the car was because I heard the mob shouting at Mr Sareth, accusing him of being Chinese,” Mr Phally said. “[I thought] he hit another motorist and fled the scene.”

“I regret this misunderstanding and mistake,” he added. “I would like to ask the court to reduce my sentence.”

Chhy Sambath, a lawyer representing the victim, said his client’s life was in danger when the incident occurred.

“They [the accused] were very cruel. They beat my client, causing serious injuries,” Mr Sambath said. “After beating him, they destroyed his car and stole his property.”

Mr Sambath said his client demanded about $300,000 in compensation for the damages and injuries from the accused.

As for the two motorbikes hit in Tuol Kork district, Mr Sambath said the owners have been compensated for the damages caused.

A verdict is due October 22.