The Prey Lang Community Network today submitted a report to the Environment Ministry accusing local authorities in the province of colluding with businessmen to illegally cut trees in protected forests.

The report, obtained by Khmer Times, said forests in Prey Lang were inspected 43 times during a nine-month period.

Prey Lang Community Network said 285 hectares of land has been cleared, 215 cubic metres of logs were found, 4,535 trees were cut down and that 76 chainsaws were confiscated by forest rangers.

“Our network has observed the transport of timber out of Prey Lang continued,” Mr Sopheap said. “At least 3 to 4 improvised trucks carried timber every day.”

“Our concern is losing our forests four to five years in the future, if the government does not restrict measures to prevent illegal logging,” he added.

“If they don’t collude with each other, they can’t transport timber out of Prey Lang forests,” he said.

Neth Pheaktra, an Environment Ministry secretary of state and spokesman, said the ministry will review the report and take legal action against persons deemed involved in illegal forest activities.

“We received their reports, but we have not yet verified whether it is the truth,” Mr Pheaktra said. “We are not denying there’s an offence, but we question whether we can manage it or not.”

He said the ministry manages about 7.5 million hectares of protected areas with about 1,260 rangers.

“Do we have enough rangers to cover 7.5 million hectares?” Mr Pheaktra said. “It is not enough so we need to bolster the amount of rangers, as well as strengthen cooperation.”

“The ministry is committed to cracking down on offences even if it is our own people committing the crimes,” he added. “We will resolve all these issues by strengthening law enforcement.”

A 2016 sub-decree made the Prey Lang Wildlife Sanctuary under the jurisdiction of the Environment Ministry. 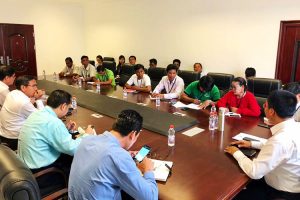 In May, UK-based Environmental Investigation Agency, said in a report that more than one million cubic metres of illegal timber has flowed unhindered from protected areas in Cambodia’s northeast provinces to Vietnam.

The report prompted Prime Minister Hun Sen to acknowledge the issue, but said that the perpetrators were motivated by former opposition party supporters to cut down trees and encroach protected areas.

“It is correct that we are losing our forests, many are being replaced by rubber plantations,” Mr Hun Sen said last week. “I acknowledge thieves have illegally cut down timber and I am ordering them to be shot from helicopters in the sky.”