In Prek Norin commune, the majority of residents are rice farmers and flood water can be seen covering their fields as far as the eye can see.

Ek Phnom District, Battambang province – As farmers here steered a boat through flooded rice fields, they took the opportunity to also do some fishing as they spoke of their crop losses.

Any chance to buttress their livelihoods and put food on the table must be taken advantage of as the floods this year have been worse than usual.

Slinging a lure into the water, Phy Sokun, 31, says half of his rice fields were recently flooded and he knows he will be incurring big losses. 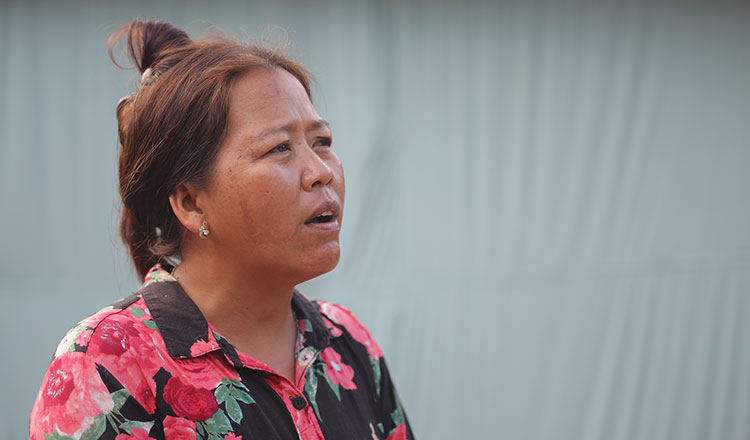 “I have six hectares and three of them were flooded, while the three others were fine because they are in a different location,” he says. “Eighty percent of the three hectares were destroyed and I only got about 20 percent of the rice because the water keeps rising very quickly and we cannot collect the yield in time.”

More than two thousand hectares of rice fields and farmland in Ek Phnom district have been inundated by water overflowing from the Tonle Sap; rice farmers are feeling the effects.

In Prek Norin commune, the majority of residents are rice farmers and floodwater can be seen covering their fields as far as the eye can see.

Navigating the boat through the fields, the farmers point to places where the water is at least one to two meters deep, with just the tip of plants protruding.

Several houses are flooded and trees litter the ground after being ripped from their roots due to strong winds during thunderstorms.

Mr Sokun says the water level this week is lower than a month ago, but the floods are receding very slowly, leaving farmers anxious and wondering why authorities have not stepped in to help.

“We cannot do anything about the water because it seems like there is no way to release it,” he says. “We have no choice but to incur losses.”

“It is hard for us to harvest. Last year, we suffered from a drought and there was no water source nearby, but this year it is flooded from Tonle Sap,” he adds.

Farmer Yang Leap, 42, says that her house is flooded along with her rice crops.

“I have six hectares and almost all of them were destroyed,” she says. “I could not harvest on time when the flood came. I got only about four tonnes and it is still green actually; if we did not harvest, they would have been lost. Every year, I usually get about 18 tonnes from the six hectares.”

Ms Leap adds that farmers in the district are scrambling to hire labourers and rice-harvesting machinery to secure any possible harvest from crops not yet lost.

“All the rice farmers are in need of machine operators to harvest,” she says. “If we do not hire them quickly, others will do so first and we will be at a loss. Sometimes, the machine owners do not even want the work because they know the farmers will not harvest much and will struggle to pay their fees.”

Ms Leap says she usually earns about $2,500 from all of her crops, which include rice, zucchinis and beans.

However, she has only managed to pocket about $500 this year.

“It is a big loss for me,” she says. “I borrowed money from the bank to operate my farm and we need to keep paying it on a regular basis. But we don’t have money now.”

“There is no one coming to help us,” she adds. “If authorities cannot do anything, they should at least give us some rice seeds.”

Ms Leap may be in luck, as the Agriculture Ministry has plans to distribute about 3,000 tonnes of rice seeds to farmers affected by floods, according to Ngin Chhay, director of the general department of agriculture. Mr Chhay says the seeds could arrive in Battambang soon.

Chhim Vorchirea, director of the Battambang agricultural department, says the damages to crops from floods are not too severe. 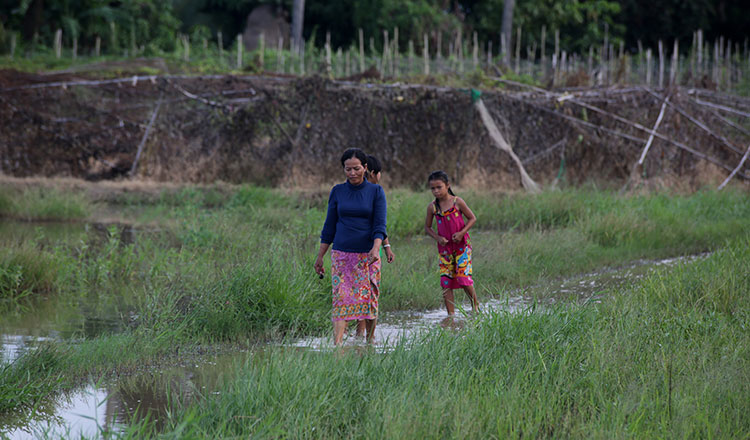 “There is no big damage to the rice fields and the water is getting back to normal conditions,” he says. “This problem is nothing new to Battambang because it is not far from the Tonle Sap lake and Sangke river. The people need to change their rice seedlings according to the water condition.”

“The farmers take the risk of changing the type of rice seedling. Because they saw other farmers using the dry-season rice seedling, they changed to grow it,” he says. “They are supposed to grow the rice seedling that is resistant to water and floods right now.”

“However, the water is now starting to recede,” he adds. “The water here is not controllable because the farms are close to the Tonle Sap.”

Floods have wreaked havoc across the Kingdom this year, with the National Committee for Disaster Management reporting that more than 50 people have died during floods in the past few months.

The NCDM also reported that the floods have affected more than 100,000 families, with thousands of residents in multiple provinces forced to evacuate their homes and seek shelter on higher ground.

In response, the Cambodian Red Cross has been visiting victims and offering provisions and China also stepped in, pledging $1 million worth of jasmine rice to aid those affected by the floods.

Rice seeds to be distributed to flood victims this weekend