The Interior Ministry’s department for combating terrorism and transnational crimes has identified two men as the masterminds behind eight people who were charged on Monday for trafficking illegal firearms meant to be used in a plot to overthrow the government.

According to a police report obtained by Khmer Times yesterday, the two masterminds are, Ros Samon, also known as Kroch, and Beng Sokha, also known as Mao.

The report said that authorities are trying to track the two men down, noting that they are likely hiding with friends who support their cause.

In the report, the police also requested Phnom Penh Municipal Court to issue arrest warrants for the two men, both of whom were also identified as prominent members of the Khmer National Liberation Front.

The eight people charged were linked by police to the KNLF and the Tiger Head movement, both deemed terrorist organisations by the government.

Investigating Judge Im Vannak, who is in charge of the case, refused to comment yesterday.

“I cannot comment on the case because we have a spokesman so you should talk to him,” he said.

Court spokesman Ly Sophanna said the case is ongoing and the court will therefore not be making any comments.

Since September 28, police confiscated 28 AK-47 assault rifles and apprehended the eight suspects in separate operations in Kampong Speu, Kampot, and Pursat provinces over their alleged involvement with two movements to overthrow the government with the help of the KNLF. 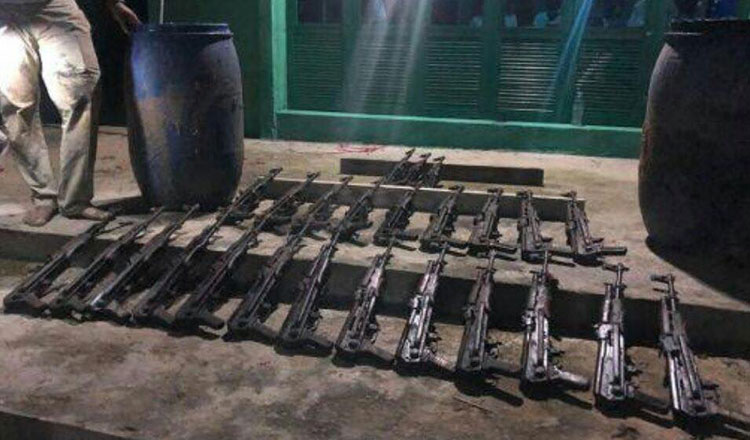 However, president of the KNLF Sam Serey denied that the eight people were KNLF members on Monday.

“I do not know them. They are not members of the KNLF. We have worked peacefully. They [police] always make up a plot and evidence to discredit the KNLF. We do not use violence at all,” Mr Serey said. “They want to defame me because the KNLF is more popular now.”

Mr Serey was sentenced in absentia to nine years in prison for trying to topple the government in 2014. He was granted asylum in Denmark after living as refugee in Thailand for a number of years.

In April, Mr Serey and his KNLF, branded a terrorist organisation by Prime Minister Hun Sen, were accused of plotting bomb attacks in Phnom Penh and Siem Reap province prior to Khmer New Year.

Mr Serey was arrested in Thailand on April 25 for overstaying his visa, but was allowed to return to Denmark on April 27.