Home - Man gets life sentence for trafficking 56 kilos of drugs

Man gets life sentence for trafficking 56 kilos of drugs

Phnom Penh Municipal Court yesterday sentenced a Cambodian-Laotian man to life in prison for trafficking more than 56 kilograms of methamphetamine and heroin from Laos to stock and distribute in Phnom Penh last year.

“The court decided to hand down a life sentence and fine him $12,500,” Judge Vicheathor said. “If the convict does not agree with the verdict, he has one month to file an appeal.”

He said that Mr Sopha was arrested on May 17 last year in Phnom Penh’s Sen Sok district, where police seized more than 56 kilograms of crystal meth and heroin from his two rental houses.

Judge Vicheathor noted that another suspect, Cambodian-Lao Sy Lakhory, 42, was also arrested in connection with the crime, but died of AIDS in prison last year.

Colonel Phoeun Mao, an anti-drug trafficking police chief at the Interior Ministry, told the court during the trial last week that Mr Sopha belonged to a drug ring and regularly transported drugs from Stung Treng by taxi to stock at his rental houses. 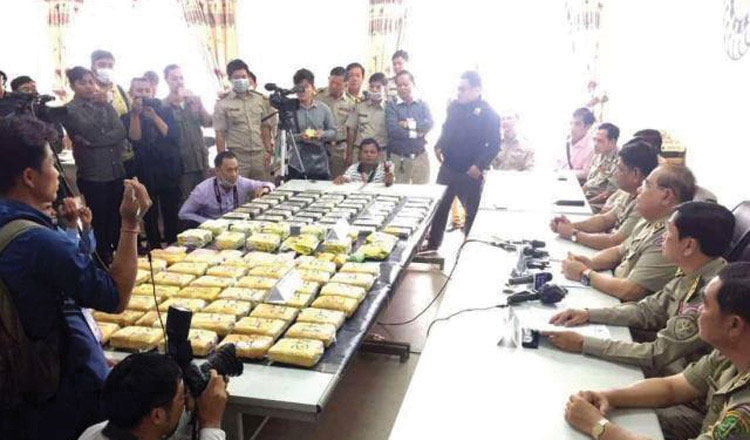 He said that an undercover police officer contacted him and asked him to deliver two kilograms of crystal meth in May last year to Sen Sok district, where he paid $50,000 for the drugs.

“Our undercover officer spent more than two months negotiating with him to buy the two kilograms of crystal meth.” Col Mao said. “He was arrested inside his car while I was counting the money paid by the undercover officer after he took delivery of the drugs.”

Col Mao said that police seized the drugs and the $50,000 from the accused after arresting him.

He noted that after his arrest, police took Luon Sopha to inspect his rental houses, one located in Sen Sok district’s Phnom Penh Thmey commune and another in Daun Penh district’s Phsar Thmey II commune.

Col Mao said that police seized more than 56 kilograms of methamphetamine and 15 kilograms of heroin which he had stocked in both houses for distribution in the city.

He said that during his interrogation, Mr Sopha told police that Mr Lakhory was an accomplice and police arrested him at the Ratanak Sambath Hotel in Ratanakkiri province on May 19.

During his trial, Mr Sopha admitted committing the offence, but insisted that he was only a middleman for the drug ring.

He claimed that the drugs seized from his houses belonged to Mr Lakhory and that he was paid a salary to store them.

“The reason why I took the risk to do this work was because I was poor and needed money to support my family,” he said. “I also needed to pay for surgery in Laos after suffering injuries in a car accident.”

Man arrested over rape of stepdaughter