After more than 10 years at the forefront of the country’s banking sector transformation, Wing is already making big plans for the next decade. The company’s CEO Jojo Malolos recently sat down with the Khmer Times’ chief operating officer, Kay Kimsong, to discuss the sector’s rapid digital evolution.

Jojo Malolos is probably as well travelled as he is well dressed. Arriving at the interview with the Khmer Times last Friday, the CEO of Wing (Cambodia) Limited Specialised Bank explains how he landed in Cambodia in 2016 after a successful career earning his stripes in Africa, the United States and of course Asia.

At the start Malolos said he has witnessed seismic changes within the industry that has transformed the banking sector.

This “phenomenon” led to an appreciation that mobile phone users, especially the poor or “unbanked”, might finally be able to gain access to financial services and institutions that were once beyond their reach.

The result? a fertile ground for mobile financial services – and the launch of Wing in 2009.

Wing introduced a network of money transfer agents across the country, paving the way for a rapid expansion. As of October, Wing boasts more than 5,000 agents with whom customers can get their money converted electronically that allows recipients to withdraw at any verified Wing agent.

Wing currently processes between 60-70 million transactions a year, worth more than USD10 billion, most of which comes from the “unbanked”, according to Malolos

An estimated 3 million customers, including 1 million account holders, now regularly use Wing’s network, a figure that is expected to increase as the company introduced a raft of new services.

An ordinary farmer, for instance, who previously was unable to afford the tillage of his soil can now receive a loan from which he can immediately cash out the borrowed amount at any agent, thus reducing any unnecessary extra expense.

Another advantage of using Wing’s services, cites Malolos, is the time-efficient and convenient payroll system for company employees. Garment workers can easily receive their salary through their Wing wallet and immediately pay their bills or send remittances to family members elsewhere in the country. 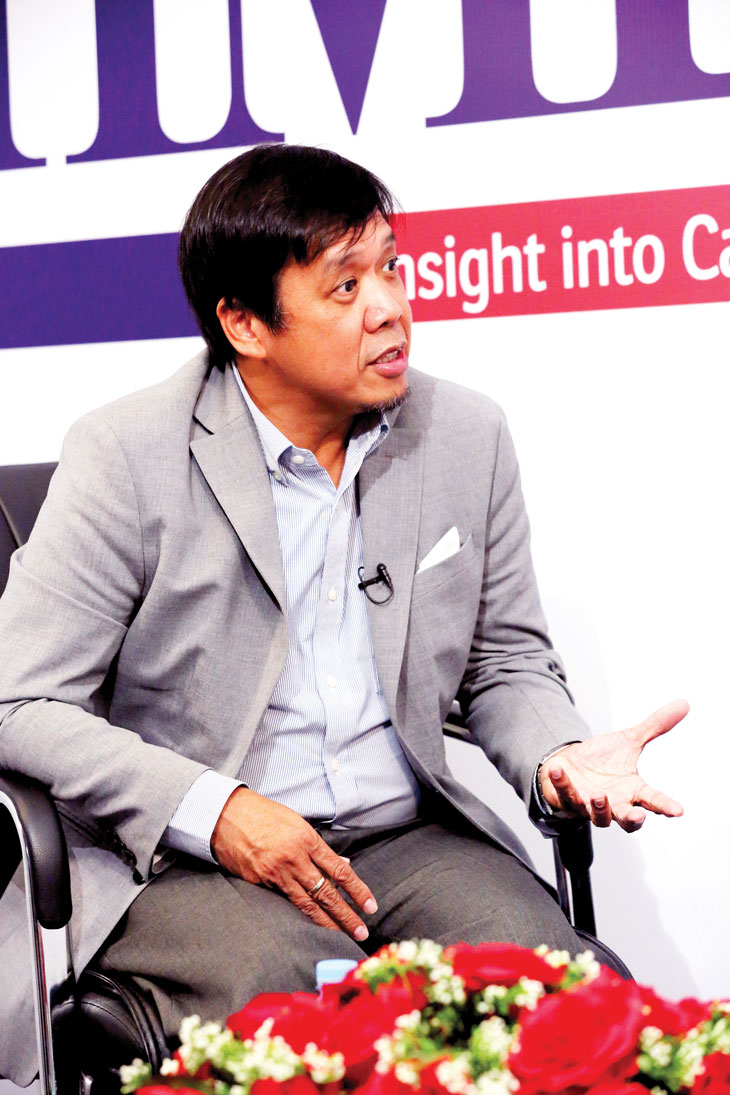 “But now you’ll see most of the tuk-tuks drivers using Wing wallets to settle their daily earnings with companies like PassApp. They appreciate the service as they can just put money into the wallet on a regular basis without having to personally handover the money.”

Young people are also using their wallet to pay for their tuition, their books, cinema tickets and they are linking up their Wing Online Mastercard to itunes, games and even their Facebook page if they are a budding entrepreneur.

As with any successful business model, it doesn’t take long for competitors to catch on. While Malolos notes that competition is always healthy for the market, he worries that those entering the market with the sole purpose of acquiring a market share could negatively disrupt the new “ecosystem”.

“In our business, it’s not just about the customers,” he says, “it’s also about these 5,000-plus agents who were not earning anything before but now earn between USD500-600 a month.

Security is also an area in which Wing is always looking to improve and stay ahead of the game. Supervision by the National Bank of Cambodia ensures its products and services are protected by world-class technology. This has allowed the provider to partner with international companies that requires high level of security system like Visa, MasterCard, Alipay, and WeChat Pay.

“We have a very extensive footprint in Cambodia and I would say we are not one of the biggest but are the biggest and the leading mobile financial services provider and FinTech organisation,” Malolos says.

He adds that Wing will continue to explore international partnership opportunities with financial institutions – it currently works with more than 50 across the world – to facilitate the transfer of remittances for overseas Cambodian workers in core southeast Asian markets and the US.

But what does the future hold for the market leader? When quizzed on the possibilities of converting Wing into a commercial bank, the CEO responds that company remains very comfortable with its ability to penetrate remote economies and is achieving its objectives of providing people with greater opportunities through financial services – although Malolos doesn’t rule it out as a move in the future.