Eight people suspected of being members of the Khmer National Liberation Front have been arrested for trafficking illegal firearms meant to be used in a plot to overthrow the government, National Police spokesman Lieutenant General Chhay Kim Khoeun said yesterday.

Lt Gen Kim Khoeun said that 20 AK-47 assault rifles were confiscated in Phnom Penh’s Prek Pnov district where the suspects buried them and the others were found in Kampot and Pursat provinces.

He refused to identify the eight suspects, saying police are looking for their companions and the mastermind.

“I can not say anything more than this. Please let the police work on it first,” he said. “The operation is not yet finished.”

According to a report obtained by Khmer Times yesterday, the eight suspects are linked to the Khmer National Liberation Front and the Tiger Head movement, both organisations deemed terrorists by the government.

“The prosecutor has questioned and charged them. He also sent the case to the investigating judge,” Mr Sophanna said.

“The two suspects are in their 60s. They lived in Kampot for years. I have no further details. Provincial police just cooperated with the National Police to make the arrests,” Maj Gen Chanmathurith said.

Interior Ministry spokesman General Khieu Sopheak said he has not yet received a complete report about the case. 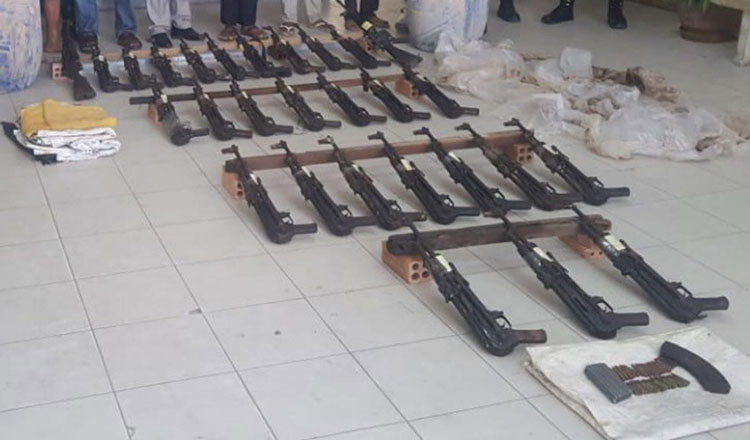 Sam Serey, president of the KNLF, denied that the eight people were KNLF members.

“I do not know them. They are not members of the KNLF. We have worked peacefully. They [police] always make up a plot and evidence to discredit the KNLF. We do not use violence at all,” Mr Serey said. “They want to defame me because the KNLF is more popular now.”

Mr Serey was sentenced in absentia to nine years in prison for trying to topple the government in 2014. He was granted asylum in Denmark after living as refugee in Thailand for a number of years.

In April, Mr Serey and his KNLF, branded a terrorist organisation by Prime Minister Hun Sen, were accused of plotting bomb attacks in Phnom Penh and Siem Reap province prior to Khmer New Year.

Soon after, the Council of Minister’s Press and Quick Reaction Unit released an 18-minute video accusing the KNLF of colluding with former opposition leader Sam Rainsy in a plot to overthrow the government.

Mr Serey was arrested in Thailand on April 25 for overstaying his visa, but was allowed to return to Denmark on April 27 thanks to intervention from Human Rights Watch, the Danish embassy in Bangkok, and the United Nations.