Prime Minister Hun Sen has accused superpower countries of using human rights to impose their will upon other countries, including Cambodia, and meddle with their internal affairs to push forward their own agendas.

In his remarks at the 73rd United Nations General Assembly in New York on Saturday, Mr Hun Sen said that liberal countries, including the United States, used human rights issues and democratic practices as a pretext to punish or topple governments in other countries.

Mr Hun Sen noted that the US and other liberal countries have attacked Cambodia over perceived human rights and democracy issues.

“The imposition of unilateral sanctions became a popular weapon of powerful nations in managing their international politics, which is completely driven by their geopolitical agendas,” he said. “This is nothing but a use of brutal force of a particular state to impose its will on other sovereign states.”

The government has accused the US of helping former opposition leader Kem Sokha to topple it through a colour revolution. Mr Sokha was arrested on treason charges in September last year and the CNRP was dissolved in November.

Mr Hun Sen also said some external circles, who have fed on ambitions to interfere in Cambodia’s domestic affairs, refused to recognise the recent national election and issued statements against it, noting that such actions are a serious assault on the people’s will.

He also called on all the nations in the UN General Assembly to respect and promote the rule of international law and the UN Charter which clearly states other countries should not interfere in affairs outside their borders.

Mr Hun Sen told the world leaders that Cambodia ran the recent election smoothly with 20 registered political parties and a high voter turnout, meaning that it was legitimate.

“By their votes, Cambodians reaffirmed their desire for peace, stability and long-lasting sustainable development,” Mr Hun Sen said. “The free choice of the Cambodian people and the legitimate result of this election is not a subject for question or debate.”

The European Union and the US criticised the July 29 election as neither free nor fair as the ruling Cambodian People’s Party swept all 125 parliamentary seats.

The European Parliament in Strasbourg, France, on September 13 said that respect of human rights and fundamental freedoms, including labour rights, are essential for maintaining EU trade preferences, specifically the Everything-but-arms treaty.

The EU’s top diplomat Federica Mogherini said the Cambodian government should drop all charges against opposition officials and activists and lift the politics ban against 118 senior members of the CNRP.

Mr Sokha was released on bail on September 10 from Tboung Khmum province’s Trapaing Phlong prison after spending a year behind bars.

Political analyst Lao Mong Hay said other countries can determine whether Mr Hun Sen told the truth or not for themselves.

“One could wonder whether our Prime Minister was telling the truth, the whole truth and nothing but the truth about the recent developments in our country,” Mr Mong Hay said.

Speaking to about 2,000 Cambodians living in the US and Canada yesterday, Mr Hun Sen lashed out at former CNRP members for using different forms of deception to incite Cambodians living abroad to stand up against his government. 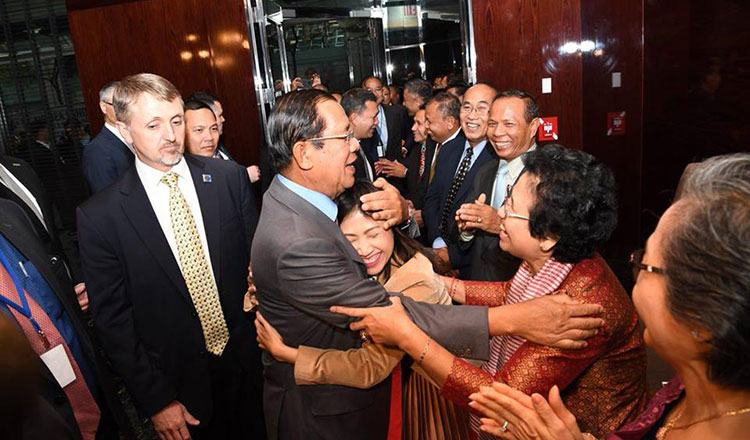 He said the former opposition party deceived people living abroad, claiming that it offered them government positions in return for donations.

He said that some former CNRP supporters have questioned where the money has gone, but opposition leaders put the blame on the government.

“I should talk a little bit on how they have cheated their supporters. They said the US will not allow me to set foot on its soil but now I’m here. They also said the UN will withdraw Cambodia’s seat from the General Assembly, but Hun Sen already delivered his speech here,” he said. “It is the way they cheated. So they should come out and explain it to their supporters.”

“I am threatened not to set foot on US soil. They made up rumours of demonstrations against me, but look, is there a big rally against me? How many people showed up? I think the protesters are fewer than ten percent compared to my supporters,” he added.