Prime Minister Hun Sen has accused villagers and supporters of the now-defunct opposition party of cutting down trees and encroaching on protected forests.

During a meeting in New York with thousands of Cambodians living in the United States and Canada, Mr Hun Sen said that suspected forestry offenders should be shot from a helicopter.

“It’s correct that we are losing our forests, many are being replaced by rubber plantations. I acknowledge that thieves have illegally cut down timber and I am ordering them to be shot from helicopters in the sky,” he said.

“In many cases [the thieves] went to cut down millions of hectares to cultivate farmlands, including groups [affiliated] with the former opposition,” Mr Hun Sen added.

The EIA said the permits submitted by Cambodia to the CITES secretariat constitute evidence that Vietnam accepted fake permits for Siamese rosewood, which faces extinction in Cambodia.

In June, the EIA published a report saying that more than one million cubic metres of illegal timber flowed unhindered from Cambodia’s protected areas in the north-eastern provinces to Vietnam. 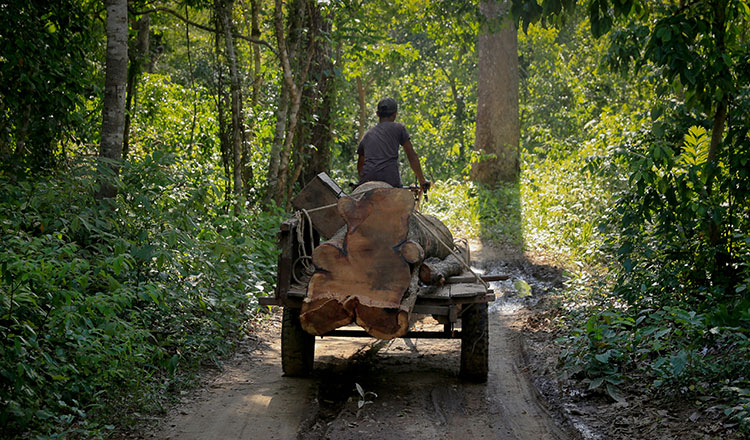 Mr Hun Sen said that in ten years, the population of Cambodia will swell up to 20 million, and that only his administration can tackle the issue of deforestation.

He noted that the government will need to address the issue of sustainable growth and development.

“Villagers will need land, and at the same time, we have to protect forests and not allow trees to be cut down,” Mr Hun Sen said. “I will decide to retire in ten years after the population has increased to 20 million. I will have to deal with [thieves] until they no longer exist.”

Environmental activist Ouch Leng said yesterday that the government has defended private companies, while at the same time blaming villagers for encroaching on land.

Mr Leng said that poor villagers cleared land in order to support their livelihoods after the government granted a number of private companies Economic Land Concessions.

“We lost forest cover because the government granted ELCs to companies as money flows into their pockets. Villagers cannot transport timber to Vietnam, only Oknhas [tycoons] and powerful people can do that,” he added. “As a leader of the government, he has to [prove] to us who the real thieves are. He has to show who they are and take legal action.”

“It’s easy to put the blame on the poor because the poor do not have power,” he added. “Oknhas have money to resolve issues with the government and the court.”