For the first time following education sector reforms, a female student has scored the top grade on the national exam.

Thon Ratana could not believe what she was seeing – a Grade C on the national exam; an F on the mathematics section.

The 18-year-old felt her world crashing in on her. After years of hard work, extra classes and late nights, all of her studying had failed her, specifically on her favourite subject of mathematics.

“My love of mathematics did not pay off; I failed,” she says. “For the first result, I passed the exam but with a Grade C, and an F on mathematics. I was devastated.”

However, hundreds of students in the same boat as Ms Ratana joined her to petition the ministry for a review, refusing to accept that they had failed the mathematics section.

“That’s why we petitioned the ministry,” she says. “We knew we were outstanding math students and wanted the scores reviewed.”

The student protest led to the ministry creating a committee to verify the results, which resulted in it apologising for a system error that affected the mathematics results of hundreds of students.

For Ms Ratana, her overall score jumped from a C to an A after her mathematics score went form an F to an A, leaving her in a historical position. 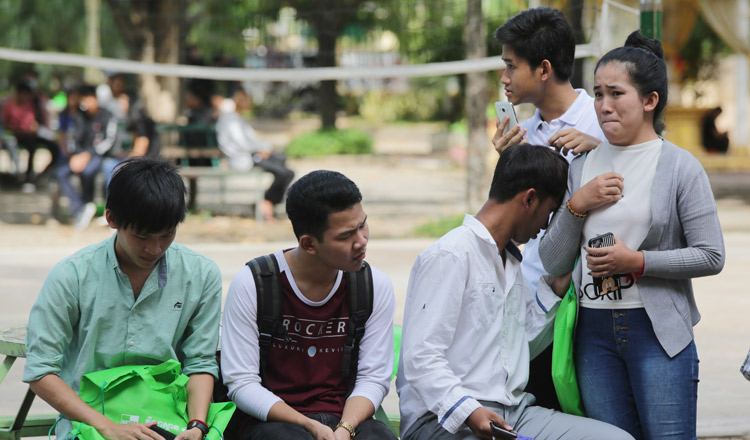 For the first time since the ministry began stringent reforms on the national exam, a female student – Ms Ratana – has scored the top grade in the country.

“My friend told me that I had now scored an A, with the top grade in the country,” she says. “I didn’t believe him. But when I checked the results for myself, I saw it was true and I was very surprised.”

Ms Ratana, who hails from Kandal province and moved to Phnom Penh for her studies when she was in Grade 4, now has dreams to become a doctor, the first in her family. Her father is a motodop driver and her mother a stay-at-home wife.

“We decided to live in Phnom Penh with relatives,” she says. “We do not have our own house in the city. My parents came to find jobs in the city so that their children could study here.”

In the capital, Ms Ratana says she was exposed to a different learning atmosphere than in her hometown, where most students were poor.

In Phnom Penh, many of her peers had more money than her family, using it to access private tutoring and better learning materials. The divide pushed her to work harder.

“When I saw my rich friends around me using modern equipment to learn, I knew I had to work harder to make myself a special student,” she says. “I started to study very hard since Grade 8.”

“It costs a lot of money for extra classes, but teachers took pity on me and I was tutored for free because they knew my family was poor,” she adds. “My teachers always gave me a chance to study more.”

At home, Ms Ratana studied from 4am to 6am before school, and again from 7pm to 11 pm after school, falling in love with mathematics.

“I love this subject because I like to do exercises I find on the internet,” she says. “If we are good at math, then we can get scholarships.”

“To be an outstanding student, we must not only learn in class, but outside of school as well,” she adds.

Ms Ratana’s achievement has already garnered her much attention, including from Prime Minister Hun Sen’s wife Bun Rany, who has promised to fund her university studies going forward.

“We have to spend a lot money to study to become a doctor and my family is poor,” she says. “Being a doctor is my dream and I also want to do it to help my family, so I am very happy that Bun Rany will help me make that dream come true.”

Ms Ratana, who is sitting outside her school in her uniform, adds that she supports the Education Ministry’s reforms of the national exam, noting that the results now reflect the true ability of students.

“No one dares to bring any documents into the class to cheat now,” she says. “This ensures that that the result matches the student’s ability.”

“She is an outstanding student,” she says. “She always comes to school early and always helps friends with their studies.”

“She always listens to advice and she is good at all subjects,” she adds. “I wish all students, especially women, would study hard like her so that they do not drop out of school and can make a better future for themselves and the country.”

Peng Chan Thon, Ms Ratana’s father, says he has never put any pressure on his daughter to score top grades.

“I am just a motodop driver, but I want my daughter to have a better life,” he says. “That’s why I have never asked her to drop her studies to help earn money for the family. I want her to study only. And I never tell her she has to get top grades. I just support her.”

“When we learned she scored the top grade in the country, we were so proud,” he adds. “We are dedicated to making her dream come true of becoming a doctor.”

Dy Kamboly, spokesmen for the Education Ministry, says the reforms over the past four years have forced students to buckle down on their studies.

“It’s a success for us,” he says. “We are proud of the students, both the men and women, and whether they get high grade or not because we know they are studying hard now.”

The stringent reforms include tapping officials from the Anti-Corruption Unit to observe the national exam each year in order to guarantee students don’t cheat, a common practice previously.

Education Minister Hang Chuon Naron led the charge for the reforms when he took office in 2013, promising to improve the country’s education sector.

The crackdown on cheating was only part of the reforms, which also saw an increase in teacher training, a boost to teacher salaries and new programmes introduced to schools.

Back at her school, Ms Ratana says she’d like to discuss the reforms more, but she has to run off to another interview – this time with a television station that wants to highlight her achievement.

“When I passed the exam with the top grade in the country, so many media outlets have been contacting me,” she says. “It’s made me very busy, but it’s okay because I hope putting my story out there will encourage other girls.”