Home - When the drums speak out for women

When the drums speak out for women

Two talented groups showed and proved that traditional music, dance and art are not dead and will never die. The musical ensemble Yaksao and all-female drum troupe Medha wowed people at the Heritage Hub in Siem Reap weeks ago with their great panache in playing musical instruments, making sounds and dancing. After a feature on Yaksao on Good Times2 last week, Say Tola now gives the spotlight to Medha – a group of women pushing not just for equal opportunity on playing music but for real empowerment. 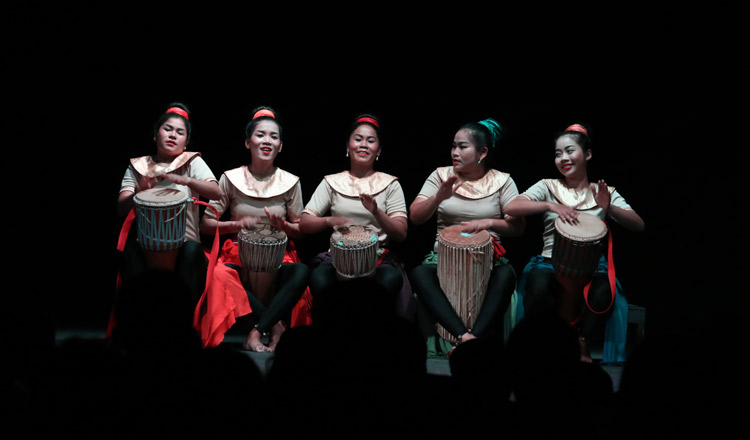 At the Heritage Hub inside Wat Bo Temple in Siem Reap on September 16, the celebration of Khmer tradition, culture and genuine flair didn’t end with the seven-member Yaksao who showed off their talents in playing several instruments and mimicking natural sounds.

After the group performed ten musical pieces, the lights were turned off – signaling the start of another extraordinary performance.

The all-female troupe “Medha” entered the performance venue, bringing with them their individual Skor Chhayam or drums. And as the lights started to flicker again, they became the center of attraction.

One girl ran to the center with a smile on her face. She was beating her drums in front of the audience, letting them know that she and her drum are meant to be heard. But she was stopped by the woman behind her – another member of Medha – and was yelled “Nak min arch leng skor (you cannot play the drum)”. The girl got back to the group and led one of the most beautiful drum-playing ever heard.

“We are Medha. We can play drums,” they shouted. With the apparent ardour they had shown in the first few minutes of their performance, it was hard not to agree that they are Medha and could play drums – really, really well.

The women started to dance around as they continuously beat the drums that hung on their bodies. Each of them showed off two kinds of traditional dances. The sound of their instruments, their body movements and everything that they did in front of their audience all depicted the strength of women – the message Medha wanted to relay. 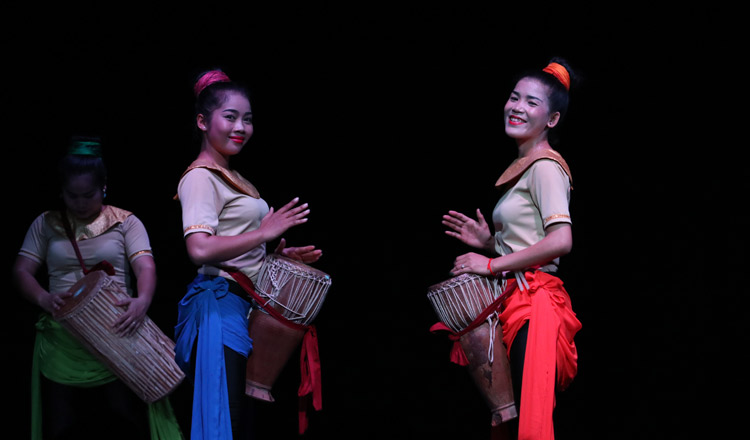 Medha was known as Siem Reap’s first drum group. Medha, which means “wisdom to move forward”, was formed in January 2017 after its members attended a workshop organised by Cambodian Living Arts. Since last year, they’ve been practicing and performing around Cambodia with hopes of showing and proving that women can play drums and perform dances as well as men.

But then, both this passion and mission come with a price.

Men Mao, one of the members of Medha, was looking at her swollen hands after their almost an hour-long drum-beating and dancing. “You might have noticed that moment when my sticks fell from my hands while I was performing on the stage. Because of the one month rehearsal that required us to give all our energy, I got some injuries,” she narrated. “But this little injury is just nothing compared to our passion – our passion to inspire other women.”

“We really want to send a message to all the women in Cambodia that they can do something – play instruments or dance or whatever. We know that some of those in the audience have experienced some form of domestic violence. Through our performance, we want to tell them to stand up for themselves and fight because they can,” she further shared.

Chamroun Rithysokvanna also shared her own experiences with the drum troupe. She narrated that she used to lose consciousness during practices because of fatigue.

“Sometimes even if we don’t feel well, we don’t stop rehearsing. I’ve even rehearsed while I had fever because our event was already coming close. I was concerned about the development and changes of the choreography. But in the middle of our rehearsal, I just lost all my energy and fainted.”

Aside from their injuries and exhaustion from non-stop rehearsals, the group also had to endure seemingly endless criticisms heaped onto them by people who did not understand why they were playing drums.

“We were told since the beginning that we should not play drums and use sticks due to our gender. But we were really curious despite being discouraged. We asked ourselves, ‘why?’ And now we know that it is not easy to play drums. We suffered a lot and even had blue-black marks on our hands but we never thought of stopping and disbanding this group,” said Mao, adding that if anything, the discouragements they received from people were the reason they strived harder in their passion.

“People have kept criticising me, including one of the members of my family. They said this is useless. But now, she really changed after witnessing our performance twice,” added Rithysokvanna.

Mao, Rithysokvanna and the rest of Medha members called on all Cambodians, women especially, to come and witness their upcoming performances and hear their message. The group said that though they did not directly earn any income from their audience, they would always be delighted to help keep the traditional music alive.

“Our performances contain important messages for all the women out there. We do not just beat the drums and dance for nothing. People can keep criticising us, but we will continue to improve and find more creative ways to prove the real strength of women,” concluded Rithysokvanna.