Inside the American Corner in the University of Management and Economics (UME), local writers, students and local and foreign literature enthusiasts gathered and expressed their own insights and perspectives on the past, present and future of Khmer literature.

Kee Socheata, a panelist and the publishing programme manager of Sipar Cambodia, began her talk by narrating the evolution of literature in the Kingdom and the influences of children’s books from the 1980s until the present day. She also shared the major activities that Sipar Cambodian continuously undertakes to preserve and uplift Khmer literature.

“From 2000 to 2015, we’ve seen lots of activities for literature. The first book fair was only attended by around 300 people in 2013. In 2017, we had about 50,000 people joining us. This clearly shows that the people of Cambodia are now starting to go back and think about literary pieces despite the emergence of technology, smart phones and other gadgets,” Socheat shared.

But though the country has seen an increase in the number of writers in the past years, Socheata said that “many people showed interest and effort for literature. It’s a good start. Yet, I personally think the quality of their writing is not competitive enough.” She, however, remains hopeful that the literary standards will continue to improve. “If we gather and share our perspectives through workshops and festivals such as this, we will likely pen and draw more beautifully.”

Pol Pisey, a well-experienced composer and screenwriter, emphasised that literature is not only exclusive for printed works such as books. The beauty of literature is also present in music and films. She also noted her personal observation that people are now going back to the popular songs of the 1960s, signifying a cycle of the popularity of music genre in a specific period of time.

“Literature is not only depicted in books, but also in films and songs. Nowadays, there are lots of original songs emerging from local singers. I am happy to see this change and I am thrilled to see more writers. My message to people in this generation as an author is that no matter what happens, don’t give up.”

Cambodian Living Arts founder and genocide survivor, Arn Chorn Pond, who authored “Never Fall Down”, was almost in tears when he shared how his family members and music instructors were killed in Battambang during the Pol Pot regime. 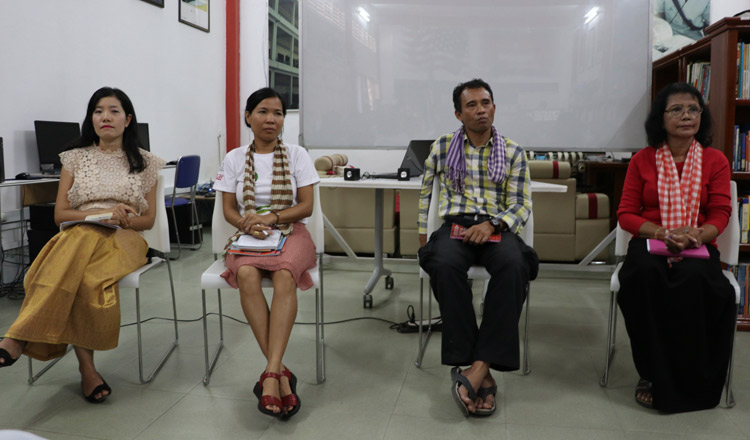 Through his works at CLA and his literary pieces, Arn is healing the wound Year Zero left in his mind and in millions of Cambodians’ minds.

He exclaimed that now that the local literature is starting to get the spotlight again, another serious problem has risen in the previous years – copyright. He shared that many good books have been re-published without permission from authors and publishers. It is an act of disrespect to the authors’ effort, he said.

Teav Bandol, a participant who travelled from Phnom Penh City to Battambang to join this year’s literary festival, shared her suggestion by raising three important points.

“To avoid illegal publication, authors should have stamp on their pieces and be careful in choosing a publication because they sometimes sell it in high prices. And if they see illegal publications, they should gather and do something legal against the publisher. We need to enforce the law. Third, readers should only buy ori-ginal books.”

The emergence of student entrepreneurs

Preparing for the next phase: UNIVERSITY LIFE