Phnom Penh Municipal Court yesterday convicted four human rights defenders and a National Election Committee official of bribery, but handed them each five-year suspended sentences for their roles in bribing a witness linked to an alleged affair by former opposition leader Kem Sokha.

All were found guilty of bribing witness Khom Chandaraty to deny her affair with Mr Sokha.

“The court has decided to sentence them to five years in prison each,” Judge Sok Sarin said. “However, the jail term begins on the day of the arrest until they were released on bail and the rest of the sentences are suspended.”

Judge Sok Sarin said that Adhoc officials instructed Ms Chandaraty to lie to judicial police when questioned about an alleged affair with Mr Sokha, promising to prepare documents for her to go abroad.

Mr Chakry was involved in bribing Ms Chandaraty because he had a phone conversation with UN official Sam Sophal to organise the documents, he noted.

“According to Khom Chandaraty’s answers, she recognised that the audio recording between her and Kem Sokha was authentic,” Judge Sok Sarin said. “The Adhoc officials bribed the witness before she went for questioning at the Interior Ministry.”

“They pressured Khom Chandaraty to tell a lie when she was questioned by police,” Judge Sok Sarin added.

During the trial last week, all five denied the charges, noting that there were no witnesses to support the claim. 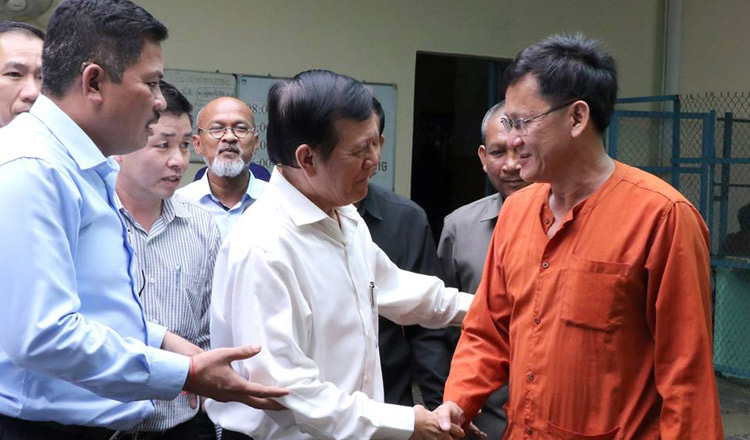 Mr Sokha, head of investigations with Adhoc, denied paying a bribe of $204 to Ms Chandaraty to have her deny the affair.

Speaking to reporters after the verdict, Mr Sokha said that he felt disappointed.

“It is very regretful and disappointing because the decision is unjust for us,” Mr Sokha said. “It is very unjust because we know that two important witnesses who accused us were not present during the trial. So, it shows there is a lack of cross-examination.”

“This decision is unacceptable for us. We will consider an appeal,” Mr Sokha added, noting that Ms Chandaraty was not the witness in the case but a suspect whom the rights group was aiding.

The Adhoc five were arrested in 2016 after they were questioned by the Anti-Corruption Unit over allegations that they instructed and bribed Ms Chandaraty to deny the affair. They were then released on bail under court supervision in June 2017.

Sam Sokong, a lawyer for Mr Chakrya, said that the five-year suspended sentence was unacceptable.

“As his defence lawyer, it is unacceptable because during the trial we did not learn who the witness was in the case,” Mr Sokong said.

Am Sam Ath, monitoring manager with human rights group Licadho, said he was dissatisfied with the conviction.

“These are the first staffers working to protect human rights to be convicted,” Mr Sam Ath said. “During the trial there was no evidence to convict them.”

“I think this conviction will have a chilling effect on other human rights defenders as they will be afraid of fulfilling their duty,” he added.

Justice Ministry spokesman Chin Malin said the court’s decision was made based on evidence.

“If they think the court’s decision is unfair, they can exercise their right to appeal,” Mr Malin said.

Meanwhile, the Supreme Court yesterday heard the case of former Adhoc official Mr Chakrya who was sentenced to six months in jail for comments aimed at putting pressure on court officials in Siem Reap province.

The Court of Appeal upheld the conviction of Mr Chakrya following the verdict of Phnom Penh Municipal Court that had sentenced him to six months in jail for public defamation and comments made to coerce authorities. At the time, Mr Chakrya was head of Adhoc’s human rights section before becoming deputy secretary-general of the National Election Committee.

The complaint against him was related to statements made on May 12 and 20, 2015, when media outlets quoted him as saying two court officials wrongly detained two citizens in a land dispute.

He also allegedly accused the officials of plotting to grab people’s land for the Vietnamese community.

During the Supreme Court hearing, Mr Chakrya denied all the charges.

“The decision of the Court of Appeal is correct,” Mr Chantha said.

A verdict is due on October 1.