Home - China provides equipment worth of $2.5 million for Cambodia’s census

China provides equipment worth of $2.5 million for Cambodia’s census

The Chinese government has provided equipment, including vehicles worth of $2.5 million for Cambodia’s census next year.

At the ceremony today, Chinese ambassador Xiong Bo and Li An, the economic commercial counsellor at the Chinese embassy handed over equipment worth of $2.5 million to Cambodian government at the ministry of interior to conduct census next year.

San Sithan, a secretary of state at the planning ministry, said that the Chinese government donated equipment, including 52 cars, 300 motorbikes, 450 desktop computers, 50 laptops, 30 printers, 30 slide machines, 200 tablets and other equipment.

Planning Minister Chhay Than said that all vehicles and equipment are necessary for conducting census which is scheduled to start on September 3 and finish on September 13.

Mr Than said that 47,000 officials will fan out across the country to conduct the census which cost about $8 million. 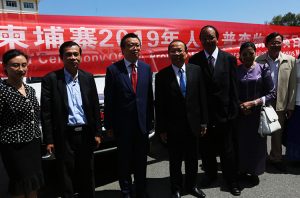 The third national census was set for this year but was delayed until next year because the government was focused on the national election in July. The first census was conducted in 1998 and the second one was completed in 2008.

Li An, a representative of the Chinese Embassy, said that the census was very important to find out the Kingdom’s development and to record the policy related to social economic development and the people’s issues.

“China’s aid for this time will help Cambodian government to conduct the census smoothly and successfully,” Mr An said.