Police and forestry officials in Siem Reap province’s Saut Nikum district on Saturday seized about 20 tonnes of illegal timber hidden under a load of rice in a truck along National Road 64.

Nop Sarak, chief of Saut Nikum district police, said authorities were tipped off about the truck by both informants and local journalists.

“We stopped the truck along National Road 64 north of Dom Dek market in Saut Nikum district’s Dom Dek commune,” he said. “Their goal was to transport the timber from Oddar Meanchey province to Kampong Cham and Takeo provinces.”

“The multiple types of woods were stashed underneath bags of rice,” he added.

Mr Sarak said three people were in the truck, including the owner of the wood and two people working for him.

“When we stopped them, they did not resist,” he said. “We initially detained three people, but after questioning, only one of them was the owner of the timber and the other two were just workers hired to load and unload the timber.” 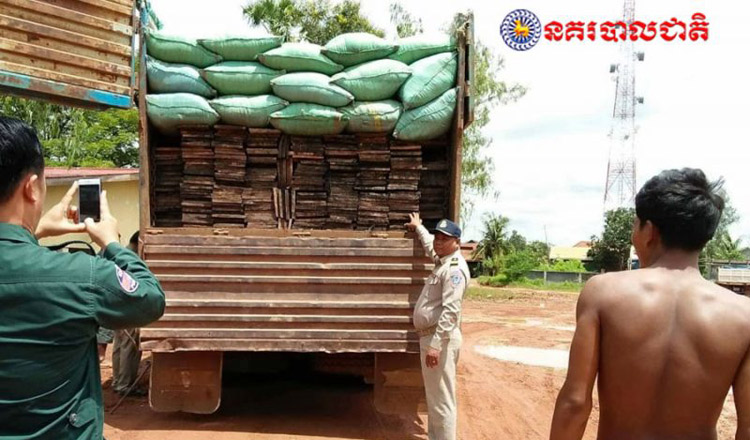 The owner of the timber was identified as Sor Siek, 38, from Takeo province, who was fined by authorities.

The timber has been sent to the Siem Reap provincial forestry administration.

Mong Bunlim, chief of Siem Reap provincial forestry administration, said that the owner was given one month to settle the fine, otherwise the case will be brought to the court.

“Because the type of woods were not luxury ones, he deserved to just be fined,” he said. “We let him go home and he must pay the fine within the given time frame.”

“The fine was worth three times the price of the wood,” he noted.