Following a two-day protest by hundreds of students and teachers at Preah Sisowath High School demanding the reinstatement of the school director, the Education Ministry yesterday transferred the director back to his old position.

After a meeting between the ministry and teachers yesterday, Moul Soy Heng, the school’s director, was transferred back to his old position.

During the protests, students and teachers claimed that Mr Soy Heng was poached by the New Generation School Programme.

The ministry on Wednesday responded by saying that Mr Soy Heng was promoted to be a ministry official with the department of secondary, general and technical education due to his hard work.

However, in a statement issued yesterday the ministry said that it sent an inspection team to audit the school prior to Mr Soy Heng’s transfer.

The audit showed that he had misused the school’s budget and his leadership style led to mismanagement.

The ministry did not detail the misappropriation, but added that Mr Soy Heng was reinstated after a vote was conducted with school teachers.

“Based on this spirit, we are reappointing Mr Soy Heng back to his old position,” the statement said. “However, the ministry demands he return the budget which was used without transparency or be held accountable before the law.”

Education Minister Hang Chuon Naron said during the meeting yesterday that a compromise was reached by ministry officials and teachers.

“The ministry has decided to stand with the school’s teachers and students by granting them the right to make their own decision,” Mr Chuon Naron said. “I’m giving the teachers here the opportunity to make a decision on whether they want to keep him or not.”

Som Komsan, deputy director at the school, said yesterday that the decision was lauded by teachers and students.

“I support the decision made by the ministry today,” said Mr Komsan, who is also a committee member of the NGS programme at the school. “It’s like a family story.”

He noted that there is no internal division over NGS-related issues. 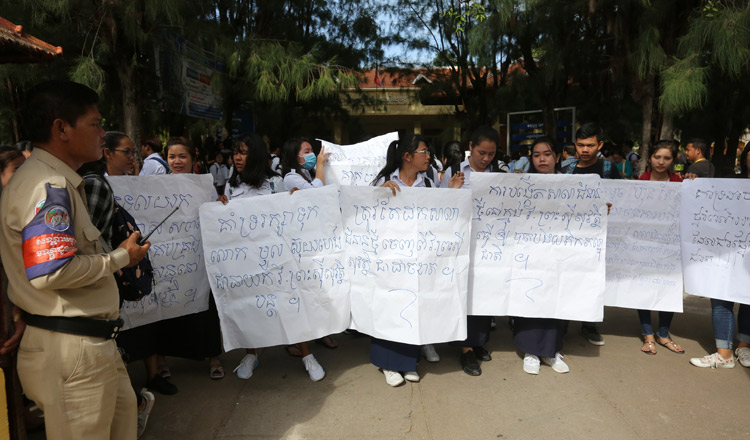 “It is part of the ministry’s reform system and the ministry has already solved it,” Mr Konsam said. “I don’t want to expose this problem any more. The problems are from misunderstanding and dissatisfaction over the reforms.”

Khem Romnea, a teacher at the school, said yesterday that she is happy to have Mr Soy Heng back.

“I am happy about the decision because he is a good person with virtue,” Ms Romnea said. “Our first demand was fulfilled, but we are still against NGS and we want it out of Preah Sisowath.”

Khy Chang Hun, a student, said yesterday that she is satisfied with the decision to keep her school director.

“I can’t always afford to pay for private classes and the director helps me a lot with my studies,” Ms Chan Hun said. “I am so happy the protests worked.”

NGS is conducted in conjunction with the Education Ministry and Kampuchean Action for Primary Education in order to improve the quality of Cambodian education.