Cambodia has emerged as one of the four recent economic outperformers in the Southeast Asian region, according to analyst firm McKinsey & Company in a report published on Wednesday.

McKinsey, an American worldwide management consulting firm, said some of the emerging economies have grown much faster and more consistently than others.

It listed Cambodia as one of the four countries – together with Laos, Myanmar, and Vietnam – that are recent outperformers.

“Seven economies achieved or exceeded real annual per capita GDP growth of 3.5 percent for the entire 50-year period. East and Southeast Asia has been the best-performing region, lifted by the soaring economies of all the seven long-term outperformers as well as the four recent outperformers (Cambodia, Laos, Myanmar, and Vietnam).

“The seven are China, Hong Kong, Indonesia, Malaysia, Singapore, South Korea, and Thailand. East and Southeast Asia is also the biggest economic region, accounting for 47 percent of the GDP of the emerging economies we examined,” said McKinsey.

It also said Cambodia is part of a group of 11 countries that have achieved excellent economic performance in recent years but whose economic achievements are not widely publicised.

“While the economic transformation stories of some Asian countries, especially China, have been widely studied, they remain remarkable in their scale and speed. Our analysis found a second group of 11 more recent, less heralded and more geographically diverse outperformers, across regions and income levels. 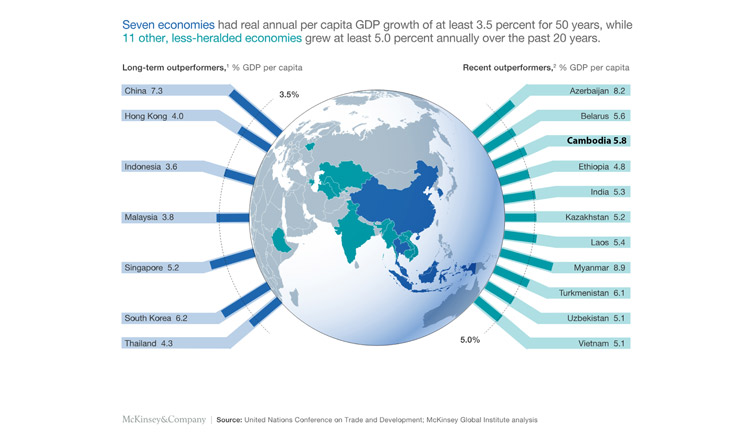 Underlying these success stories is a pro-growth policy agenda and the standout role of large companies.

Emerging economies have accounted for almost two-thirds of the world’s GDP growth and more than half of new consumption over the past 15 years. Yet economic performance among individual countries varies substantially.

Sustaining growth remains challenging, nonetheless: some long-term outperformers in this region, including Singapore and South Korea, have experienced decelerating GDP growth in the past few years with lagging rates of productivity improvement.

More recent outperformers such as Cambodia and Vietnam are still “works in progress” and have varied shortcomings across productivity, income, and demand.

The report said outperformers have developed a pro-growth agenda across public and private sectors aimed at boosting productivity, income, and demand.

Steps to boost capital accumulation, including (sometimes) forced savings, are a common feature, as are deep connections to the global economy.

Governments in these countries have tended to invest in building competence, are agile and open to regulatory experimentation, and are willing to adapt global macroeconomic practices to the local contexts.

Critically, their competition policies create an impetus for productivity growth, increased investment, and the rise of competitive firms.