Home - The sounds of Yaksao

Let’s talk about traditional arts, music and dances in Cambodia. Let’s talk about how these emblems of our identity have continuously maintained to be at the forefront of our lives despite modernity and social changes. With active organisations and talented individuals who put so much effort in preserving and promoting Cambodia’s traditions and cultures, this Kingdom has not ran out of performances and shows that proudly exhibit such.

It was already dark in Siem Reap. The clock has already struck seven – a time when most people have already settled in the comforts of their homes and eating dinner with their families.

But inside Wat Bo Temple – one of the oldest temples in Siem Reap – the crowd got thicker as the minutes go by, an obvious sense of patriotism and sincere appreciation of traditions hovering above. It was a night of music, a celebration of culture as everyone waited for Yaksao and Medha to take the center spot and perform.

The performances, organised by Cambodian Living Arts under the Heritage Hub branch, was part of CLA’s mission to strengthen living heritage – the range of cultural and artistic practices that are part of people’s lives, from music to ritual and crafts.

Yaksao, a traditional music ensemble, and Medha, an all-female drum troupe, did not – even for a bit – disappoint.

After a brief introduction by Koeut Sochea, the project coordinator of Heritage Hub, the beautiful sound of Srolai started to reverberate around the historic temple, catching everyone’s attention. The sound was followed by a euphony of 21 musical instruments – gong, flute, dulcimer (khim), some po, roneat ek, etc – played by the seven artists of Yaksao, who were all sitting on mats formed around a small circle. The artists then started to mimic the sounds of animals, birds, humans and nature as they continuously played the musical instruments with their hands.

There were audible whispers in the crowd – probably some comments on the performance they had witnessed. For first-time viewers, the music of Yaksao may come across as weird, sometimes, incomprehensible.

But there also was obvious admiration in the faces of the people who attended the monumental event. Seeing the artists, who bear so much passion and talent in their auras, play three musical instruments each all at once was worth getting all awestruck.

The group played a total of 10 musical pieces, with each piece getting thundering applauses from the audience.

The success of last weekend’s performance was a product of the two-week workshop organised by the Heritage Hub for the Arts Development Programme of CLA in August. The members of Yaksao underwent extensive training from music experts, where they also learned how to express themselves through music – without words.

Yaksao, a term that has its roots on the first capital city of Angkor – Yasodharapura – is composed of five male and two female artists.

“The audience heard the sounds of dogs, elephants and other elephants, the waves of the sea, drops of water and many other sounds of nature. Through these sounds, we want to deliver the different emotions of people and the beauty of nature. Our musical instruments, which were so many as you noticed, were all traditional ones. We used them to express the different tastes of life,” said Phal Kon, the leader of the group. 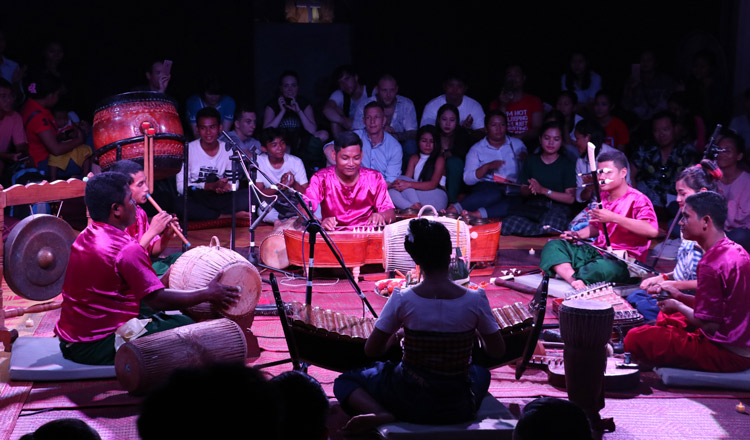 He further explained that the ten songs they played were under the theme “Ros Somleng”.

“Our performance was inspired by the sounds of humans, animals and nature to show emotions such as happiness, sadness, tranquility.”

Not incorporating words into the sounds they produced was also a conscious choice of the group. Kon said his group wanted their audience to listen to the sound and melody itself, not just on the lyrics of the songs.

“People like listening to music and its lyrics. However, they forget the lyrics as time passes by. This means that they really do not understand the song. So with our music, we want them to think and to focus on the sound. These sounds have meanings, but it requires time and concentration before they discover them.”

“Most of us like the feeling of being in a dream where we feel light. But for us, we want people to feel something that will trigger emotions. If they focus deeply on the sound, they will realise that listening to music isn’t just about hearing, but understanding and absorbing its message.”

The group held practices for at least 20 days under the supervision of Heritage Hub. Kon said that their performance in Wat Bo came out the way it was because of the hard work each member of the group exerted and of the help extended by CLA and music critic Phan Chamroeun, who has been an avid supporter of Yaksao since the group was formed last year.

For 16-year-old Chhorn Channa, witnessing Yaksao’s performance for the second time seemed surreal. He said he understood and appreciated all the sounds the group played. “While listening to them, I felt like I was walking alone into the deep forest surrounded by many kinds of animals – elephants, dogs and birds. I felt scared, but when they started playing a happy sound, I also felt the joy radiate in me. Their sounds really created a mix of emotions inside me,” Channa shared.

Kann Dara, meanwhile, said that it took her some time before she was able to follow the sounds of Yaksao; and when she finally did, Dara found it hard not to admire the kind of talents that each of the members of the group has.

“I am personally amazed by the performance. They played several musical instruments but all the sounds blended perfectly. I do not honestly know much about Yaksao but I guess I’ll always remember their sound,” Dara said, also noting that she vows to support traditional music groups in Cambodia and help preserve the true sound of the kingdom.

Note: Medha drum troupe also gave a remarkable performance at Wat Bo. A full feature on the group – who they are and what they do – will come out next week.

Even the mountains cried