Home - Even the mountains cried

Even the mountains cried

Cambodian-American educationist, medical doctor, entrepreneur and philanthropist, Okhna Dr. Mengly J. Quach, launched this week his newest Khmer-language book, ‘Dangrek Mountains…unforgettable’. Having experienced Cambodia’s darkest times himself, he shares a truthful and emotional account on the tragic scenes at Dangrek Mountains – the witness to the suffering and death of the Cambodian people. Som Kanika joins the book launch and talks with the author on the inspiration behind his printed work.

Okhna Dr. Mengly J. Quach has long been known for his contributions to the education and health sectors of Cambodia. He founded leading educational institutions and continuously manages a mobile clinic that caters to marginalised communities. But probably unknown to some, Dr. Mengly had to go through hardships before he became who he is now. Growing up in the province of Battambang, his family also suffered during the Khmer Rouge regime and civil war, where they were forced to live in a camp along the Khmer-Thai border along with hundreds of thousands of desperate Cambodians.

To share this unfortunate yet significant part of his life – and the life of many other Khmers – Dr. Mengly launched on Wednesday his newest book, ‘Dangrek Mountains…unforgettable’. The book is a compilation of the miserable experiences his family and the Cambodian people went through as internally displaced people, then refugees and asylum-seekers, and victims of conflicts. But more than anything else, the book is a compilation of stories of survival.

“The core idea of publishing this book is to let the next Cambodian generation know the intense stories after the collapse of Pol Pot regime, the unpleasant stories of hundreds of thousands of displaced people who were executed, starved and were withdrawn from their own families at the Khmer-Thai fringe. These memories that can’t be eradicated continue to haunt me, leading me to write this book,” Dr. Mengly said during the book launch at Monument Books.

He shared that he saw how Cambodians journeyed to the border seeking refuge and enduring starvation and torture.

“I and 12 members of my family were part of those affected by the offensive in 1979. Along the Khmer-Thai border, we hid in the camp, under the house of neighbours and pagodas. We were told to leave because they would send us to a safe place such as the US. However, thousands of displaced people, thousands of those who were hoping to be saved, were instead sent to death.” 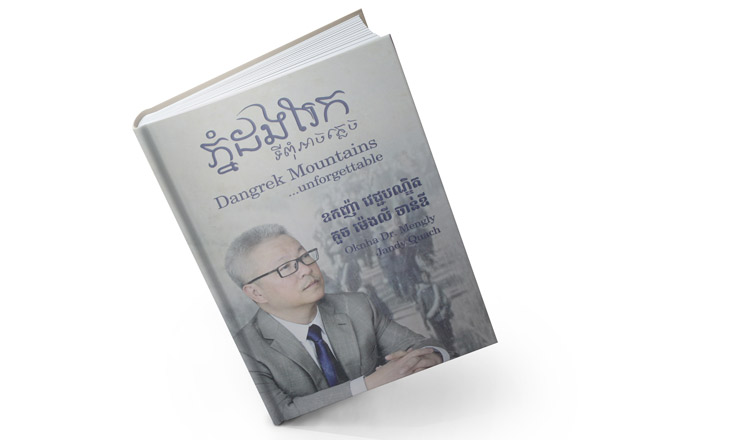 “We were among those who survived. My family and I saw the catastrophe our fellowmen went through.”

Dr. Mengly said he wanted to share this part of history with the Cambodian people, whom he owes his identity, and give everyone access to the significant story of their own land.

“Taking two years to explore, write and publish this book, I wholeheartedly trust that the citizens, especially the young generation of Cambodia, will be able to know the history and picture for themselves the heartbreaking stories of the people who were tormented remorselessly in the Dangrek Mountains.”

Since the book also tackles the unpleasant history of Khmers and Thais, Dr. Mengly noted that he only aims to share what he had experienced himself.

“Despite the fact that it can affect the close relations between Cambodia and Thailand, I think the history should be heard and learned by the next generation. I hope that this tragic past can tighten both countries’ friendship and strengthen them. This will serve as a reminder to us – a lesson to learn from.”

The book is now on sale for $7.50. Copies of the book will also be contributed to numerous libraries in Cambodia for students from both private and public schools. The proceeds of the sales will be used to help the community.

“The amount of money we had wasn’t sufficient even for the publication and distribution. But the main purpose of this book is to open the gate for youth to understand our own bitter historical background and mark it as a lesson learned. We shall never let such tragedy occur again.”