Hundreds of students and teachers yesterday protested at Preah Sisowath High School in Phnom Penh over the removal of their school director and the implementation of the New Generation School programme, which they claim alienates poor students.

The New Generation School is a programme conducted in conjunction with the Education Ministry and the Kampuchean Action for Primary Education in order to improve the quality of Cambodian education.

Students who wish to attend the programme must take an entrance exam in the fields of science, technology, engineering and mathematics.

They must also pay for their own books and other fees to use the programme’s high-standard equipment such as computers and projectors.

Those who protested yesterday said that the programme alienates and discriminates against poor students.

Sombath Oudom, a junior at Preah Sisowath High School, said that he felt discriminated against when the NGS programme began at his school.

“Right now, there are two buildings, one for us and the other is for the NGS students,” Mr Oudom said. “It’s like we don’t have the same rights. There’s so much discrimination.”

“The ministry should take NGS out of our school because it’s not right to implement this in a public school,” Ms Phalis said.

Some students and teachers have claimed that Preah Sisowath director Moul Soy Heng was poached by the NGS programme.

“I feel so disappointed with the transferring of Moul Soy Heng out of his director position,” Ms Phalis said. 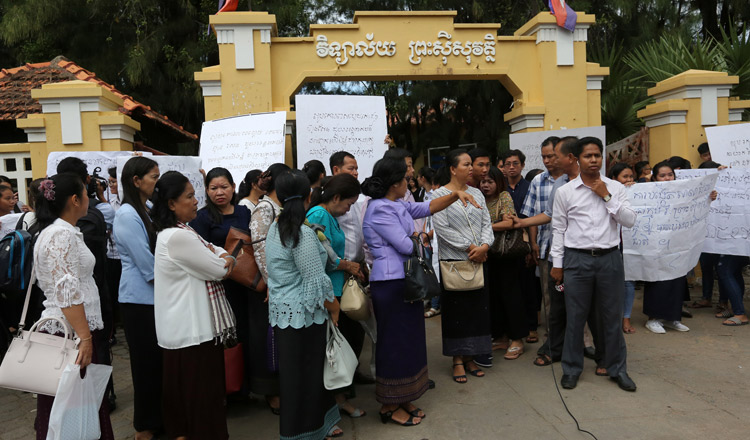 The Education Ministry yesterday defended the programme and the transferring of Mr Soy Heng in response to the protest.

It said the NGS programme aims to improve the country’s education system.

Ministry spokesman Ros Soveacha said that the programme has so far been successful and will continue to be implemented in schools across the country.

“The ministry last week chose nine temporary school management committees,” Mr Soveacha said. “So far, the ministry has not yet received petitions filed by the protestors, but the ministry is studying the issue and is willing to compromise.”

Mr Soveacha said that the ministry promoted Mr Soy Heng as a ministry official with the department of secondary, general and technical education due to his hard work.

In a statement on Tuesday, Preah Sisowath High School defended the implementation of the programme, claiming that it roots out corruption in schools. 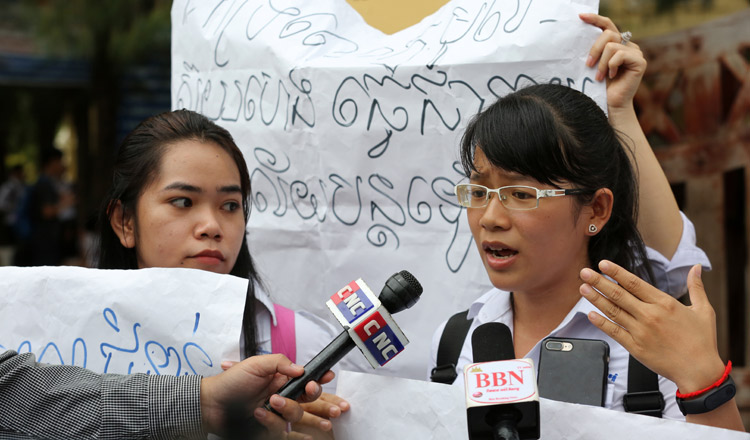 “The establishment of NGS at Preah Sisowath has rooted out corruption and introduced higher standards of teaching,” the statement said, noting that some teachers have been charging students thousands of dollars per month in illegal fees for private classes. “The same teachers are now lobbying the ministry to close down NGS so that they can eliminate the competition and expand their lucrative illegal endeavour.”

Chap Sothea, a mother of an NGS student, said yesterday that the NGS programme has been helpful for her son.

“My child is studying at Preah Sisowath’s NGS and he’s gone through a lot of change,” Ms Sothea said. “On behalf of parents, I would like to thank all the teachers at the NGS for providing good quality education for my child.”

Three schools have been selected to have the NGS programme for the 2017-2018 academic year.

The NGS programme is one of 15 Education Ministry projects tasked with the reform of the Cambodian education system.