US President Donald Trump has pledged to work with the Cambodian government to enhance cooperation and relations between the two countries and expand global health cooperation, according to a Cambodian official.

The promise was made in the presenting ceremony of a credence letter which Cambodia’s newly-appointed Ambassador Chum Sounry handed over to Mr Trump at the White House on Monday.

According to a statement issued on Monday by the Cambodian embassy in Washington, DC, Mr Sounry expressed the government’s good will to strengthen and broaden friendship and cooperation for the mutual interests of both countries.

Mr Sounry assured Mr Trump that he would try his best to work closely with the US administration for the sake of the bilateral ties.

Mr Trump applauded Cambodia’s development, and the arrival of a new ambassador which was important on many levels.

“The economic development your country has achieved during this time is astounding, and we are proud to be a partner in growth,” Mr Trump was quoted as saying. “We know Cambodia has the potential for much greater development in the future, and we are excited to work together on challenges and opportunities.” 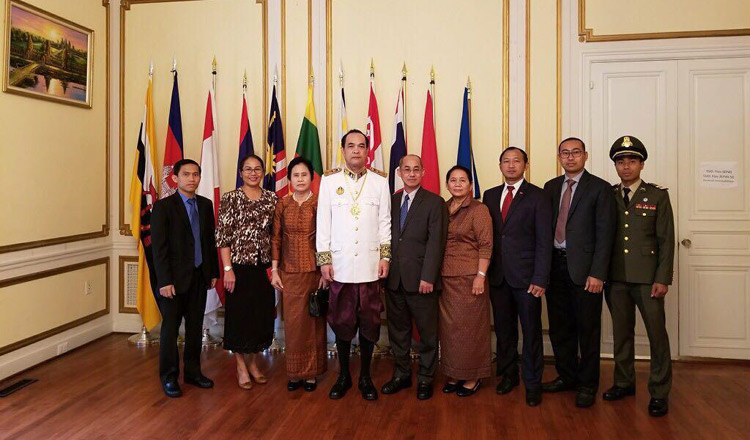 Mr Trump added that the US was looking forward to progress in free and fair trade, regional security, and more accountable, democratic governance.

“We seek to expand our global health cooperation,” Mr Trump said. “Mr Ambassador, I am glad to work with you to advance our common agenda and deepen the bonds between our countries.”

The pledge comes after incoming US Ambassador to Cambodia Patrick Murphy recently voiced concerns over deteriorating relations between Cambodia and the US.

In a meeting recently with Interior Minister Sar Kheng in Phnom Penh, Mr Murphy requested that the government not link the prosecution of any former CNRP officials to the US.

US Embassy spokeswoman Emily Zeeberg said in an email earlier this week that the US is concerned with democratic backsliding and Cambodia needs to take genuine measures to improve the bilateral relationship.

The US embassy in Cambodia declined to comment yesterday.

Speaking to garment workers in Phnom Penh yesterday, Prime Minister Hun Sen reiterated that he must maintain the Kingdom’s independence and sovereignty.

Mr Hun Sen did not mention any country by name, but said that he would work with those who understood and listened to each other.

On Monday, French Prime Minister Edouard Philippe sent a letter to Mr Hun Sen congratulating him for forming the new government, and reaffirmed that the French government was ready to help Cambodia develop democracy and peace.