Prime Minister Hun Sen yesterday said he will make an official visit to the UN General Assembly on September 27 and meet with his Cambodian supporters.

Speaking to thousands of garment workers in Kampong Speu province, Mr Hun Sen said he will deliver a speech at the UN General Assembly and will meet a number of senior officials, including the UN Secretary General.

Mr Hun Sen also said that he will make official visits to Japan, Indonesia and the EU to attend meetings and forums.

Mr Hun Sen noted that no country dared to suspend Cambodia’s seat in the UN as suggested by former opposition members and that Cambodia would not conduct a re-election.

“Who has a big head? Who in the world dares to suspend Cambodia’s seat in the UN? Please do not be confused,” he said. “I want to stress that Cambodia will hold commune elections in 2022 and the national election in 2023. Besides this, nothing will be conducted. So, do not wait for the resurrection of the dead [CNRP] party.”

The EU’s top diplomat Federica Mogherini said last week that the Cambodian government should drop all charges against opposition officials and activists and lift the politics ban against 118 senior members of the CNRP.

A resolution by the European Parliament in Strasbourg, France last week calls for all charges against former opposition leader Kem Sokha to be dropped and for his full release.

It said that respect of human rights and fundamental freedoms, including labour rights, are essential for maintaining EU trade preferences, specifically the Everything-but-arms treaty. 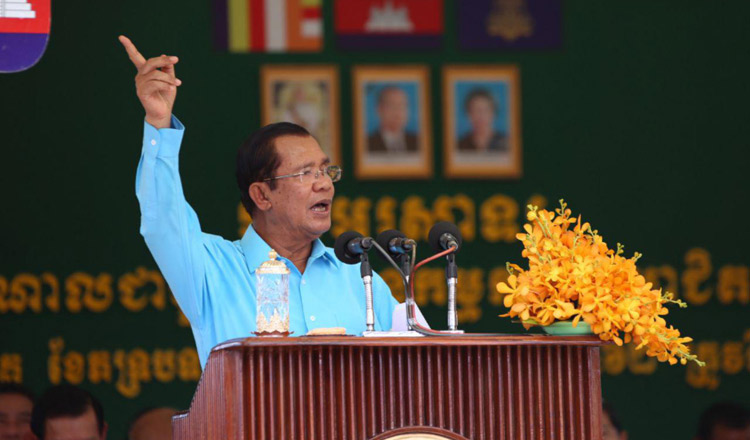 “The previous day, Sar Kheng has already said. But today I want to affirm that [Mr Sokha] has not been acquitted yet. He was transferred to another location so that he won’t die in prison,” Mr Hun Sen said. “For humanitarian and security reasons, we do not have a law on house arrest yet, but the court can limit the boundaries of the detention.”

Mr Kheng on Sunday said that he assisted with the transfer of Mr Sokha from Trapeang Phlong prison to his house in Phnom Penh.

Mr Kheng said that to legalise the transfer, Mr Sokha was suggested to pen a letter to National Police chief General Neth Savoeun asking him for police to protect his safety while under court supervision.

Mr Hun Sen warned that those who interpreted the house arrest or the court decision in a wrong way may endanger themselves.

“Action must be taken related to the court judgement. Otherwise, the court may issue a detention order to another place. Do not go too far. Do not mislead this because it will lead to your own risk,” he said.

Mr Hun Sen said that he is considering a law on house arrest for Cambodia, noting that lack of such legal instruments led to misunderstandings.

Justice Ministry spokesman Kim Santepheap said that the ministry is now working to draft the law on house arrest.

“We are examining the matter now to draft an appropriate law,” Mr Santepheap said.

Legal expert Sok Sam Oeun said that the law on house arrest was enforced successfully in many countries with positive outcomes.

“It’s a good idea to have this law, so the government does not have to spend a large amount of money to feed prisoners and to hire a lot of officials to ensure their safety,” Mr Sam Oeun said.

“But conditions must be determined strictly for those who wish to be placed under house arrest. For example, those who are charged with defamation and small cases shall be entitled to make a request,” he added.