Raids on illegal fishing in Kandal

Authorities in Kandal province’s Kien Svay district on Saturday cracked down on illegal fishing activities and seized 2.5km of nets, 200 bamboo poles and more than one tonne of fish in Korki Thom commune.

Vong Savin, deputy district police chief, said yesterday that police carried out the raids with district fisheries administration officials, but no one was arrested.

He noted that the fishing nets were left unattended and said the authorities suspect that local residents are behind the illegal activity.

“We conducted the crackdown on Thom Lake but did not find anyone there, only the nets, poles and fish,” Mr Savin said. “We destroyed the nets and released 1.2 tonnes of small fish back into the lake.”

He added that the nets, which had small holes and are prohibited from being used, were laid out although it is not fishing season. 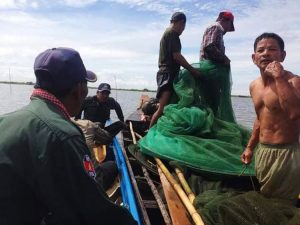 “We will regularly carry out such checks or whenever there is a complaint,” Mr Savin noted.

Ou Chheang, district deputy governor, said that despite campaigns to educate people against fishing illegally, there are those who are ignorant about the off-season period.

“Our people do not seem to care about the effects of illegal fishing in the lake,” he said. “We have held many campaigns to advise them not to fish during the off-season and also not to use illegal nets.”