Home - Rising from the ashes of the past

Rising from the ashes of the past

Tith Sam Onn has used her tragic past as motivation to keep her commune chief post for 16 years.

Tith Sam Onn sits at her desk as she tells a story of how she lost her family during the Khmer Rouge era.

For the 68-year-old Sak Sampov commune chief in Phnom Penh’s Dangkor district, the past matters as much as the future.

“My past is what motivates me to be a leader. As commune chief, I am motivated by the hardships of my past,” she says. “I was a victim of Pol Pot’s regime. In my lifetime, I have lost a husband and five children. When I lost them, I vowed to do anything for anyone.”

The suffering she endured 43 years ago has become the main motivating factor throughout her illustrious 16-year career as a commune chief. She attributes her success in politics to hard work and unwavering dedication to her constituents.

Under the ruling CPP, Ms Sam Onn says that the key to her success is to closely listen to who she’s serving.

“Because of Hun Sen, Heng Samrin and Chea Sim, I and countless other Cambodians are now free from all the killings,” she says. “I serve unconditionally; I am loyal to the people and the party. Every day, I do work for the people who need help.”

Born in 1950 in Takeo province, she is the eldest of 13 siblings, and her family was once affluent before the conflicts that tore Cambodians apart from their loved ones.

Her father was an official at the Preah Ket Mealea Hospital in Phnom Penh. Ms Sam Onn studied until Grade 7 at Santhormok High School, and was married at 15 to a police officer, with whom she had five children.

However, happiness did not last long for Ms Sam Onn.

In 1975, her husband was executed and her five children starved to death under Pol Pot’s brutal regime.

“Forces loyal to Pol Pot jailed my family and I in Pursat province,” she says, crying. “One day, we asked our captors if there was more to eat than just porridge for the children, and they took my husband; I asked them where they took my husband, and they told me that he was executed. Within a month, my children died of starvation.”

After Pol Pot’s regime was deposed in 1979, Ms Sam Onn was finally liberated from her captors. Since then, she says she has kept her promise to work for the greater good of her country and her people.

Ms Sam Onn returned to Phnom Penh and began working for the government in her village and her commune as a staffer.

“I had knowledge and I was able to read and write so I was tasked with handling youth and women affairs. However, I found it difficult because people depended on donations,” she says. “The donations were only given to poor widows because they had to be prioritised. The wealthy ones resented me for it. They argued that they too deserved financial aid, and that made my work very difficult.”

Though she initially struggled, Ms Sam Onn continued her work until 1994. The commune council recognised her dedication and assigned her to become a commune councillor.

Ms Sam Onn was then encouraged by the Dangkor district governor to learn civics and to run for office in an upcoming council election.

In 2002, she took the advice and became the first female Sak Sampov commune chief, where she has been chief ever since.

“One thing I learned about good governance is to never hold back on what needs to be said,” she said. “Dare to speak and move forward is my motto – it means that the commune chief must always keep his or her promises. We should not wait for an order from a higher ranking official, we should always do what is right for the people.”

At first, she was discriminated against for being a woman working in a male-dominated institution.

“People used to pressure me to do what they wanted – only then was I be considered good,” Ms Sam Onn says. “Following the law was considered bad, but I served unconditionally and struggled to make things work.”

Her loyalty to her people and her work as commune chief has gained Ms Sam Onn recognition from government officials.

During her tenure, she has been gifted six motorbikes from senior government officials as rewards for her dedication. However, the motorbikes were given away in order to help others. Ms Sam Onn prefers riding a bicycle.

Mr Thoeun says that he approves of Ms Sam Onn’s performance in making his community a better place.

Roads, canals, health centres and other infrastructure projects have been attributed to Ms Sam Onn’s efforts in making the community better for residents, he says. 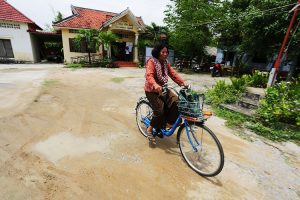 However, Mr Thoeun notes that Ms Sam Onn could put more effort into educating the community about laws.
“As commune chief, she should help disseminate rules and regulations. That would be a good thing,” he said. “But as for development work, her leadership is good. It’s just that she needs to make people understand the rule of law.”

Aside from receiving the admiration of the people in Sak Sampov commune, Ms Sam Onn is also looked up to by her subordinates.

Commune clerk Ien Sreynoch recognises Ms Sam Onn’s contributions and says that her work inspires other officials in the commune.

“Her leadership is good, her door is always open at the District Hall,” Ms Sreynoch says. “People can meet her directly regardless of the time. Sometimes when I’m not at the office, she takes over my job.”