Home - Woman charged over stash of $15,000 in counterfeit cash

Woman charged over stash of $15,000 in counterfeit cash

Pursat Provincial Court yesterday charged a woman with fraud and circulating counterfeit money after police found more than $15,000 in fake notes in her house.

He said Ms Vuthtey faces up to five years in jail if convicted and is now in prison pending her trial.

Maj Vichetr said that police had gone to her house to arrest the accused on Monday following a complaint from a businessman that she cheated him.

He noted that they found $15,300 in counterfeit money in the house. 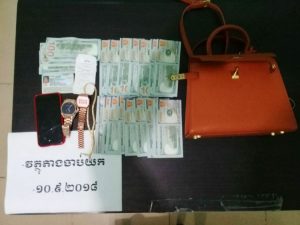 He said that Mr Darath told police that on August 15 he ordered some chairs online from Ms Vuthtey and paid $1,150 for them into her bank account.

Maj Vichetr said that Mr Darath came to know of the accused’s business through her advertisement on Facebook.

He said that according to the sales agreement, Ms Vuthey was supposed to deliver the furniture a day after receiving the payment.

“But after she received the payment, she did not deliver the items as promised,” Maj Vichetr said. “When the victim phoned her to demand his money back, she did not reply and later changed her telephone number.”

He said that Mr Darath tried to contact the accused several times, without success, and then lodged a report against her on August 20.

Maj Vichetr noted that police traced Ms Vuthtey’s address through her Facebook account and went to her house to arrest her on Monday.

Lon Rith: I will do different than my father