PHNOM PENH – Cambodia, be ready. Charlie Puth is coming to the Kingdom of Wonder!

Smart Axiata announced on Monday that the American pop sensation is the next international music icon to arrive in the capital for the November instalment of its Smart Mega Concert series.

The Smart International Mega Concert at Koh Pich in Phnom Penh on 2nd November 2018 will be pumped by the 26-year old Charlie Puth who gained international attention with his 2015 hit song ‘See You Again’. The song was featured on the Fast and Furious 7 movie soundtrack. 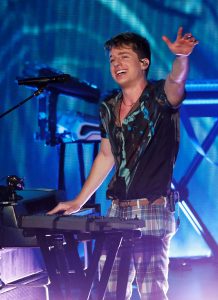 Subsequent hits like ‘We Don’t Talk Anymore’, ‘One Call Away’ and ‘Attention’ have further solidified his position as one of US’ top male pop singers.

Thomas Hundt, CEO of Smart Axiata, said during Monday’s press conference, “We are overly excited being able to bring such a well-known star to perform in Cambodia. Our beloved customers are passionate about music, both local and international, and we are happy that Charlie has agreed to be the latest addition to our successful Smart Mega Concert series. Thank you to everyone who has supported Smart throughout 2018; we hope you will enjoy what promises to be a fantastic concert!”

“Charlie is an example of how hard work, as well as savvy use of social media, can be used to share the love for music and become a star. He is an inspiration for aspiring artists across the globe where songs such as ‘We Don’t Talk Anymore’ and ‘Attention’ have become such popular hits, including in Cambodia. Hopefully, some of Cambodia’s bright and talented singers will follow in his footsteps,” Mr Hundt added.

Previous Smart International Mega Concerts have been graced by superstars like South Korea’s CL and Rain, Demi Lovato from the US and UK’s Jessie J. This year’s concert will also feature a fantastic line up of local Khmer Original artists before Charlie Puth’s headlining performance.

There’s no doubt that it’s going to be a blast – a night of live music and entertainment with Charlie Puth and Khmer artists, exclusively for Smart subscribers.

The end of the road for ‘world’s cheapest car’