The fire that ripped through the 2ND CLUB (located on the corner of Street 51 and Street 254 in Phnom Penh) in the early morning of Tuesday, Sept.11, almost totally destroyed the building and its interior.

Major General Neth Vantha, director of the Fire Prevention Department of the Interior Ministry, reported that the conflagration broke out around 5:00 in the morning; more than 30 fire trucks were deployed to extinguish the blaze. It took over three hours to get the fire under control, and no one was injured or killed. 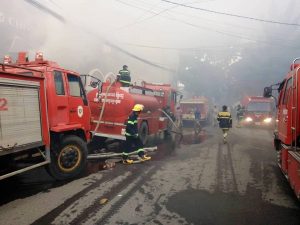 Because the investigation by fire officials is not completed, he could give no information as to its cause.
He also said that 351 fires were documented in the first six months of this year, which is a slight increase over the 309 cases during the same time period of 2017. The 2018 fires have killed 15 persons, injured 32, and damaged or destroyed 316 houses/buildings.