Newly-elected CPP lawmakers, who held positions in the government, officially resigned yesterday from the National Assembly in order to keep their government posts.

In a five-page document submitted by the CPP to the National Election Committee yesterday, 38 lawmakers with senior minister, minister and secretary of state titles officially resigned.

Additionally, eleven candidates resigned from their parliamentary posts in order to have their positions refilled.

Mr Phal Virum said that elected lawmakers and current government officials will be able to work effectively to deliver promises made by the party during election season.

“I believe it will bring positive results,” he said. 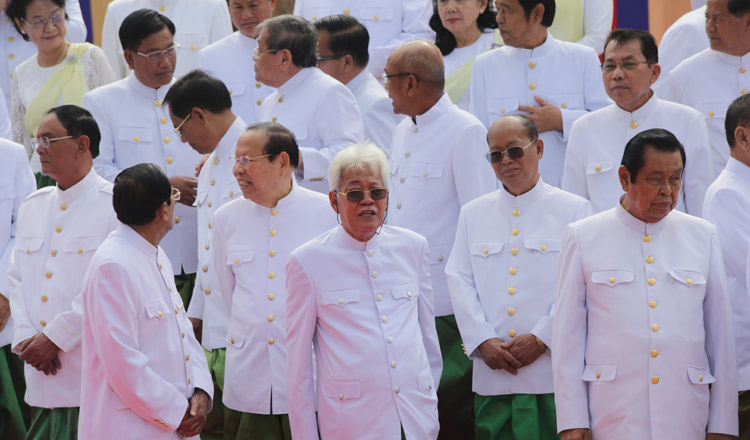 “The NEC will check what seats are available in each province and pair those seats with CPP’s proposed candidates. It will not take long, and I hope we can finish as soon as possible,” Mr Sorida said. “Then we will submit the request to the National Assembly and the National Assembly will hold a session to announce the changes. After that, the candidates will take their oath to become lawmakers.”

San Chey, executive director of the Affiliated Network for Social Accountability, said yesterday that the move will give an opportunity for younger officials to make a difference in parliament.

“It’s good to give opportunities to new party members so that they can share their ideas on how to improve the nation,” Mr Chey said. “I understand that their predecessors are more experienced, but their predecessors are overworked due to holding two positions. It’s a good time to give younger people a chance to show their capacity.”

During the first parliamentary session last week, Mr Hun Sen said that only he and his deputies will retain their positions, while those appointed as senior ministers, ministers or secretary of state must resign from the National Assembly.

Funcinpec and KNUP may merge