Phnom Penh Municipal Court judge Ky Rithy has ordered former opposition leader Kem Sokha not to meet with any former CNRP officials, an individual or foreigners whom the court believed to get involved in his court case.

Mr Sokha was released on bail in the early morning today from Trapeang Phlong prison in Tboung Khmum province after he has been jailed since September last year on treason charges.

He arrived at his home in Phnom Penh’s Tuol Kork district around 5am today.

Under the court supervision, Mr Sokha is banned from making trips abroad or going far from his home except a few streets surrounding his house, including street 313, 311, and 608 in Tuol Kork district’s Boeng Kak II commune.

Mr Sokha must respond to summons issued by the investigating judge, the court document said, adding that he must not meet any ex-CNRP officials or an individual, especially any foreigners who seemed to get involved in his treason charges.

“[Mr Sokha ] must not get involved in any gathering or political activities,” it said. 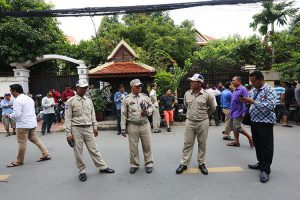 Man held after sucking blood from animals, killing them