Home - Putting rubbish on the catwalk

Putting rubbish on the catwalk

Super Sen has been turning rubbish into designer clothes and his work has caught the eye of large companies.

Super Sen is surrounded by rubbish, painstakingly trying to stitch together discarded bottle caps and compact discs to create a dress.

Mr Sen, the 26-year-old co-founder of La Chhouk Recycled and Creative Fashion, asks one of his workers to take over and says his venture is about more than just fashion.

“Our purpose is that we want to show people that rubbish is not useless,” he says. “It can be reused and repurposed, bringing benefit to people and even an income.”

Mr Sen began his rubbish to fashion business in 2014 as he studied at the Royal University of Fine Arts, from where his workers now come, many of them from the LGBT community. 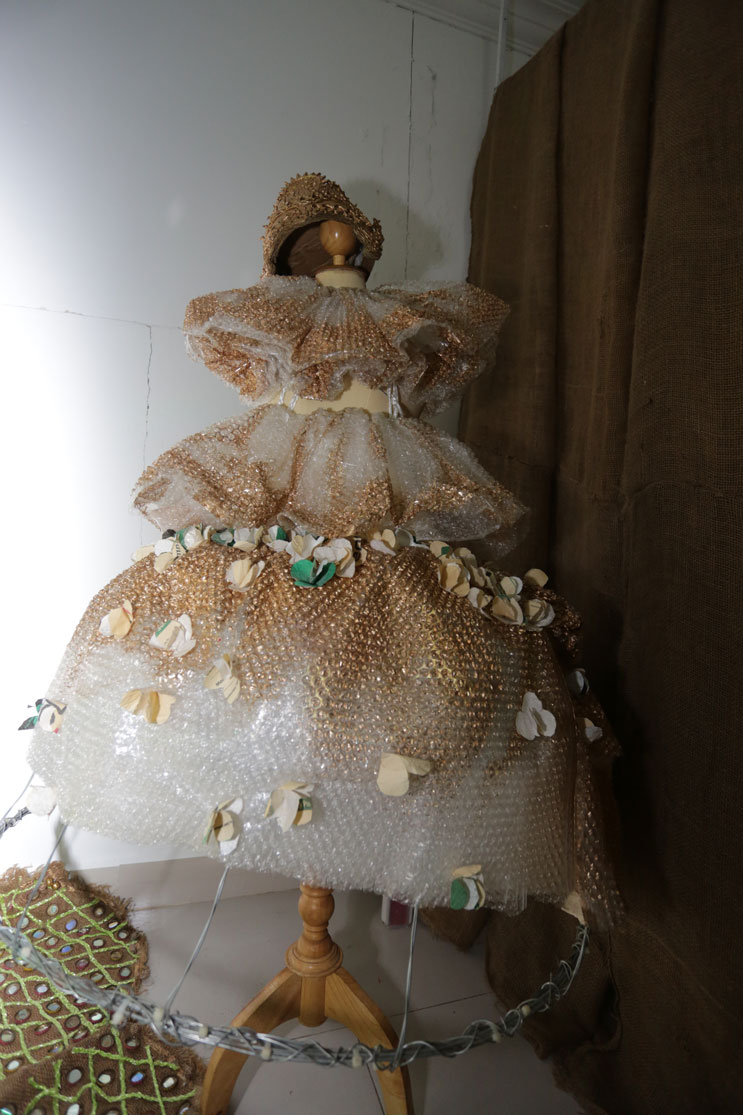 He has about 20 people working with him, each one committed to creative fashion, environmental protection and the fight for LGBT rights.

“The LGBT community is always discriminated against,” he says. “People don’t give them a chance, and therefore never get the chance themselves to see that they have so much creative talent.”

“They’re people like everyone else and do anything like anyone else. They are good at creative work; they have good ideas and that is the reason why I recruited them to join us. They are artists.”

Most of his team is from the Royal University of Fine Arts, where they are still studying. During their spare time, they collect rubbish and help out with the fashion business.

“We always collect things from public places, such as markets, along the riverside, schools, garbage piles on the street, and other places to use in our designs and for fashion shows,” he says. 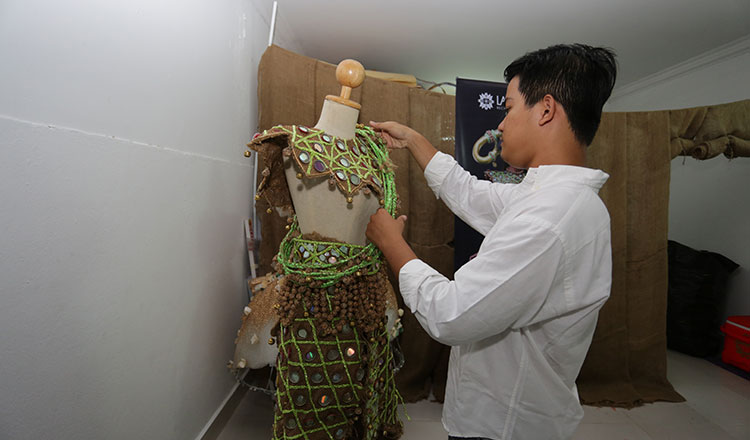 Run out of his small rental room in Russey Keo district, Mr Sen’s venture has nonetheless attracted some big clients, most recently Tiger Beer and WWF, which commissioned him to design a dress to celebrate Global Tiger Day and shine a spotlight on endangered tigers.

For the Tiger Beer fashion show in July, Mr Sen used discarded plastic to design a tiger-striped dress which garnered a lot of attention.

“It’s not easy sewing clothes using rubbish,” he says. “It’s totally different from sewing with nice cotton. We must work meticulously in order to make it work and have the dresses be of good quality.”

Upon first glance, many of the group’s works are easily mistaken for high-end outfits, but when studied further, bottle caps, CDs, plastic waste and other rubbish becomes visible.

Mr Sen remembers one dress that took the group about one month to complete, again on commission from a company looking for something unique to push its agenda. 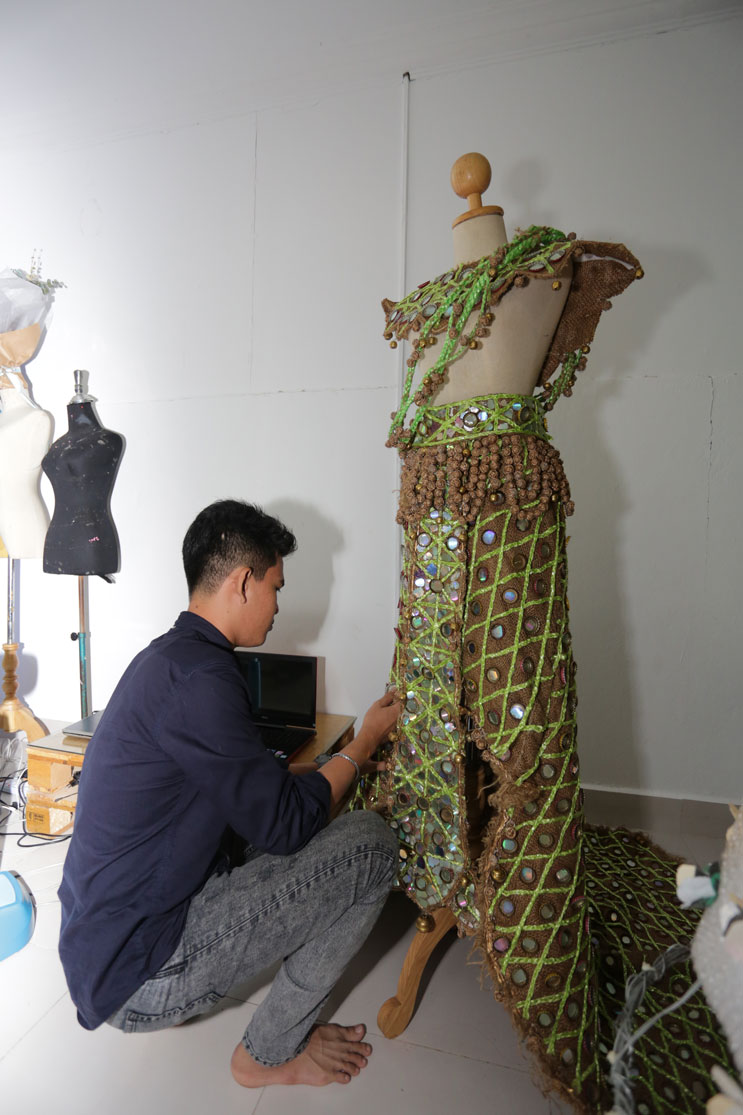 “We don’t get paid much, sometimes the company sponsors us by giving us food or materials for the dress,” he says. “Most of the team members have other jobs and are still studying, so they come here on their free time to gain experience.”

Since 2014, La Chhouk Recycled and Creative Fashion has created about 100 dresses, he says, noting it has gained more traction in the past couple of years.

Ou Panha, 24, says she feels at home when aiding the group because she is often ostracised outside of it for being a lesbian.

“I feel down with my life outside of the group,” she says. “No one wants to be friends with me or have any contact with me. But with the group, I am welcomed and can show my talent as a designer, which surprises many people.”

Ms Panha explains that people are surprised because they think members of the LBGT community have no talent and cannot contribute to society. 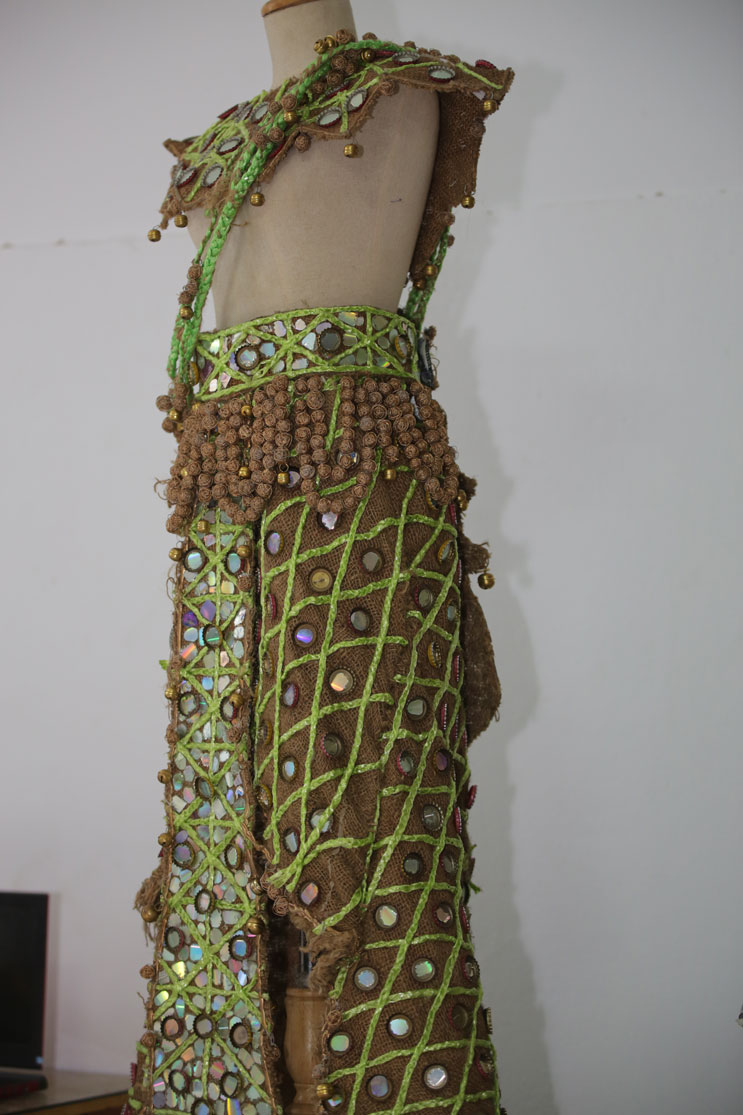 “But I am strong and I always encourage other LGBT people to stand up and work and show their talents so people can know the truth,” she says.

Bun Pou Palleap, 19, a member of La Chhouk Recycled and Creative Fashion, is studying interior design at the Royal University of Fine Arts.

She joined the group after seeing a fashion show it held at the university, which triggered her creative spirit.

“With the team, I can also help push for environmental protection, which is a passion of mine,” she says. “Before, I felt shy whenever I picked up rubbish on the street, but now I understand how it can be repurposed and I love our work.”

“I want to show people that rubbish also has its value,” she adds. Pen Dara Lucky, 19, another student of the university, says he joined the group about four months ago after being recruited because he had already designed a dress using rubbish in the past.

“They were interested in my previous work,” he says. “I love designing clothes and I like decoration work. So, here I can put my talent to use and gain practical experience outside of school.”

Back in his small rental room, Mr Sen takes the bottle cap dress back from his worker and begins putting the final touches on its completion.

CAMBUILD 2018 EXHIBITION TO OPEN NEXT WEEK AT KOH PICH