Siem Reap provincial police handed over more than 100 pieces of unexploded ordnance to the Cambodian Mine Action Centre on Wednesday fearing that they might cause an unintentional explosion.

Chan San, an official at CMAC based in Siem Reap province, said that the ordnance was collected over a few months in the province.

“We received the ordnances of various types from the Bureau of Weapon and Unexploded Ordnances Management under the order of bureau chief Chhet Nha,” he said. “The collection was from all the districts throughout the province and when the provincial police found out that they risked exploding, they contacted us.”

Mr San said that the ordnance was very rusty and old and needed to be fixed or destroyed.

“We can keep them, but if we cannot fix them because they are too rusty, we need to destroy them right away,” he said. 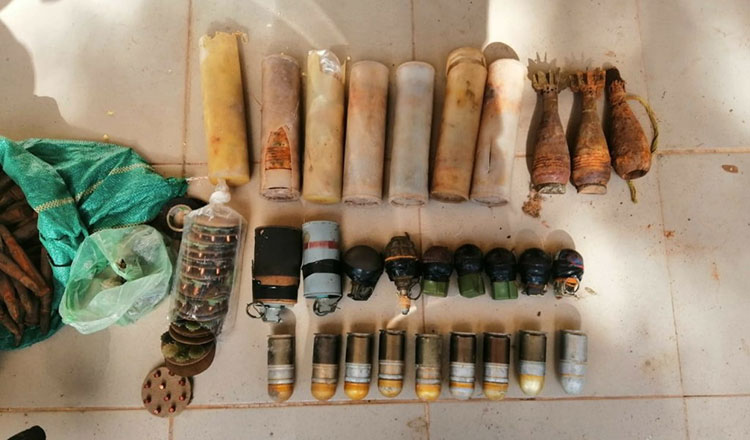 Chhour Moeng, an officer with the weapons bureau, said that the handover of the ordnances was to avoid any possible incident.

“There was a total of 108 ordnances including grenade bombs and landmines. This is the result of collection from the districts from months ago that he have kept, so we need to hand them over to CMAC to avoid any possible accidents,” he said.

“Sometimes we can pile up a large number, so we contact CMAC right away. However, if we have very few, we need to wait,” he added.

Casualties caused by landmines and unexploded ordnance decreased last year in comparison to 2016, according to the report from the Cambodian Mine Action and Victim Assistance Authority.