Home - All aboard the art tours!

All aboard the art tours!

The tuk tuk’s warmed up and off we go, deep into the heart of Temple Town’s art and culture and artisanal boutique scene on what is dubbed ‘Siem Reap Art Tours.’

It’s a special occasion too, because this trip celebrates the tenth anniversary of the art tours which were established in 2008, “To assist local high end hotels in Siem Reap accommodate their guests’ quests for local contemporary art…filling an artistic gap no one knew was there. No one except Siem Reap Art Tours founder Robina Hanley, that is.”

Robina, or Bina, as she is known to Siem Reap locals, is a long-term gal-about-town-in-heels and she says, “I was working in a local gallery and I noticed more and more hotel managers calling me for information on where they should send their VIP clients who were looking for genuine galleries.

“Having lived in Siem Reap since 2006, I have forged deep personal relationships with many artists, gallerists, curators and designers here so it was easy for me to put mini itineraries together for them.”Bina’s tours only cater to a small groups of people at a time and she charges $75 to visit venues on the tour with added extras the tour serves up, including a “backstage pass” to the behind-the-scenes life at the venue and a chance to meet and greet venue owners, many as interesting as the art they create or the wares they purvey.

But the biggest unsung bang for the bucks in the tour is Bina’s engaging and illuminating commentary – being Irish, Bina does have the gift of the gab which comes in handy with tours lasting for 4-5 hours at times.

And as our tour gets underway, the tuk tuk trundles down the dirt back streets of Siem Reap to pull up at Theam’s House, the home and studio of the reclusive artist and designer Lim Muy Theam.

Years ago, Theam’s House was just that, a little house with a room with some shelves stocked with some of the artist’s signature lacquer elephants.

Now…well, now it beggars description because the artists’ little house has transformed into a complex compound, a wonderland of niches, nooks and crannies, rooms and dioramas, displays featuring decades worth of collections of intricately patterned porcelain plates and age-cracked vases, vintage traditional musical instruments and aged and weathered Buddha’s dioramas of scenes depicting traditional Khmer domestic life and a cheery workshop where workers help assemble pieces.Plus displays and a shop, featuring Theam’s artworks and artisanal wares.

Then it’s off again in the tuk tuk to take to the start of fashion designer and costumer Eric Raisina’s headquarters. As with Theam’s House, Eric’s place used to be a small house with a room with some garments for sale.

Eric’s a bit of an international bloke – a Madagascar-born fashion lover who was making textiles for Yves Saint Laurent and Christian Lacroix in Paris before moving to Siem Reap over a decade ago. His creations also have an international following with the latest triumph being a dress creation worn by True Blood star, Rutina Wesley, at this year’s NAACP (National Association for the Advancement of Colored People) awards.

Eric’s joint takes time to tour, with lots of rooms housing workers treadling traditional weaving looms, and women sewing intricate little bits and bobs to go on dresses that can take up to three months to create. Where the women and some guys work is ultra-modern light, cheery, breezy and faint free, very much the antithesis of Cambodia’s grim garment sweatshops.

And then it’s back in the tuk tuk and back on tour – usually the tour calls in at renowned photographer John McDermott’s gallery at FCC but that’s undergoing renovations, so it’s off to an array of artisanal boutiques dotting Siem Reap’s trendy Kandal Village where we meet the likes of Jodi Arden of ‘attire rustique’ shop676, who used to be a US ice skating champion, often blading to the tune of Tubular Bells. 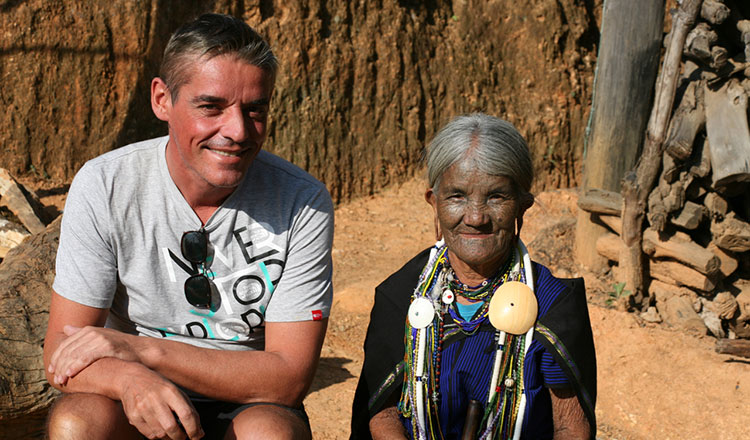 We pop into Paradise, which purveys items from both Bali and Cambodia and then it’s on to meet the charming French-Vietnamese Louise Loubatieres, owner of Louise Loubatieres Gallery, who moved to Siem Reap from London in November 2012, having studied textile design at London’s Chelsea College of Art, followed by a stint as designer and product developer at Lyle & Scott, the British men’s knitwear label worn by bands like Arctic Monkeys and Kasabian.

Also on display are the last two works in a series of five paintings by musician and Cambodia Space Project co-founder Julien Poulson, that were directed to the memory of his former wife and Space Project singer and frontwoman Kak Channthy who was killed in a traffic accident in Phnom Penh in March.

And that’s it, tours over – time to recover from an arduous but scintillating experience.

Slimming with our mind